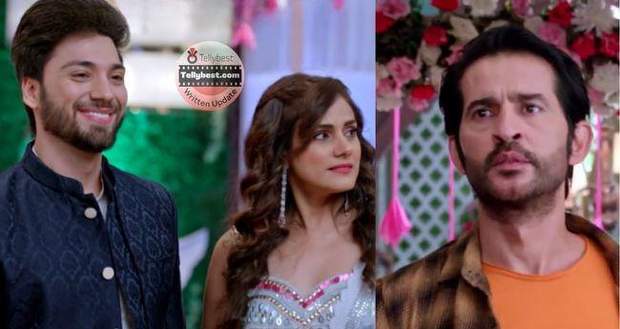 Sid mumbles to Shubham that their plan is working because even if Avni loves Lakhan back, Ram will not let them be together.

Meanwhile, Swati tries to explain to Lakhan that he is wrongly judging Ram.

Lakhan says that he has worked really hard to earn money.

Lakhan says that he never chased after money but just for the sake of Avni, he tried to make himself even more worthy and capable.

Swati tries to calm Lakhan down, but Lakhan is inconsolable.

Meanwhile, Yash angrily calls a big businessman Mr. Mehta and asks him not to invest in Lakhan's project angrily.

Avni tries to calm him down and takes the phone from his hand.

Avni promises to do anything that Yash wants her to do but begs him not to take away Lakhan's dream from him.

Yash asks Avni that will she marry Sid for Lakhan's sake.

Yash immediately goes back into the Kapoor mansion and tells Ram that Avni has happily agreed to the wedding.

Ram and Priya ask Avni if she wants to marry Sid or not.

Yash interferes and says that Avni is not a talkative one, but Ram insists on asking Avni whether or not she loves Lakhan.

Ram requests Avni to tell him the truth and consider Ram his brother.

Avni nodes her head in a no but Priya is still not convinced.

Ram then asks Avni if she likes Sid and wants to marry him and Avni says yes.

Ram happily welcomes Avni into his family and asks Yash not to worry as he will take care of Lakhan.

Priya has a feeling that Avni will not tell truth in front of everyone else and she needs to get her alone and talk to her.

Later that night, Priya tells Ram that she feels that they are doing wrong since she has a feeling that Lakhan is not lying.

Ram says that he didn't like the way Lakhan barged in and embarrassed Avni, if he truly loves her then he should have put in a decent proposal.

Ram then says that Avni said yes to the marriage.

Priya replies that Avni did not say yes but only agreed to Yash.

Ram thinks to himself that maybe Priya has a point.

The next day, Pihu manages all the decorations while Priya and Ram watch her from a distance.

Ram calls Sid and says that they should talk to Avni once more before coming to a conclusion, he asks Sid to go and talk to Avni herself.

Priya thinks to herself that Sid and Shubham can't be trusted, and she needs to take the matter into her hands.

Priya tells Swati that she knows that Swati is Lakhan's mother and tells her that she believes in Lakhan and has come here to learn the truth.

Priya insists Swati tell her the truth, but Lakhan arrives at the same moment and says that he doesn't need her help as he has already said what he wanted to.

Lakhan asks Priya to leave because nobody wants to learn the truth especially Ram Kapoor who only believes in what he wants.

Lakhan accuses Priya that Ram has sent her there.

Priya says that she doesn't want to separate two people in love and so does Ram.

Lakhan says that yesterday Ram was not interested in the truth and now all of a sudden, he has changed.

Priya replies that Lakhan is not thinking before saying anything and then insists Lakhan tell her the entire truth.

Meanwhile, Sid and Shubham reach there too and overhear Priya and Lakhan.

Sid gets restless that Priya will ruin everything, but Shubham calms him down and tells him that he has the matter in his hands.

© Copyright tellybest.com, 2022, 2023. All Rights Reserved. Unauthorized use and/or duplication of any material from tellybest.com without written permission is strictly prohibited.
Cached Saved on: Wednesday 25th of January 2023 08:53:14 PMCached Disp on: Wednesday 1st of February 2023 05:57:33 PM