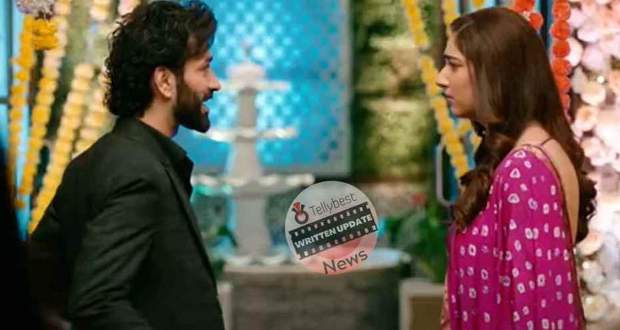 Today's Bade Ache Lagte Hain 2 5th September 2022 episode starts with Nandini and Vedika questioning Brinda about the reason why she kept the truth hidden from Ram.

Brinda tries to explain that she was waiting for the DNA reports to arrive so that she can convey the truth to Ram.

Answering that, Vedika says that the DNA reports have the date from 4 days ago which means that Brinda and the others knew the truth from earlier.

Nandini asks Brinda if Priya told her to keep the truth hidden because she does not want Ram to unite with Pihu.

Brinda strongly denies such an allegation but the whole accusation lands over Priya as soon as she enters the room.

Ram shows Priya the DNA reports and asks her why she kept the truth about Pihu being his daughter concealed from everyone.

Priya gets taken aback as she discovers that Ram is aware of the truth and tries to explain to him that she has been trying to tell him about the truth.

However, Nandini interrupts Priya and blames her for tearing Ram apart from Pihu for all these years.

Priya asks Nandini to stop acting smart but gets snubbed by Ram who asks her to behave properly with his mother.

Aditya, Brinda, and Vikrant try to convince Ram to listen to Priya but he commands them to leave as they also betrayed him by lying.

Ram says how hurt he had been 5 years ago when Priya said that her child belonged to Krish and now he is discovering that Pihu was his daughter all along.

Without seeing any other way, Priya announces that she will reveal the whole truth to Ram about what happened 5 years ago.

However, Nandini does not let Priya talk and says that there is only one way to unite Ram with his daughter.

Nandini says that Priya has to leave the house without Pihu or else she will tell Pihu about Priya’s time in jail.

Hearing that, both Ram and Priya get shocked and Priya begins to request Ram not to separate her from her daughter.

Falling into Nandini’s emotional trap, Ram agrees to the suggestion and asks Priya to leave quietly before Pihu wakes up.

Suddenly Pihu comes there and asks Priya why she is crying after noticing her tears.

Priya replies that it is nothing and tells Pihu that she has to leave for important work while Pihu has to live with Ram there.

Pihu does not agree with Priya’s suggestion at first but then stops complaining as she likes Ram.