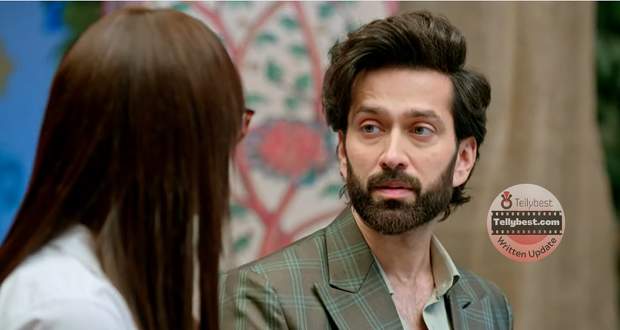 Today's Bade Ache Lagte Hain 2 6th December 2022 episode starts with Vedika feeling angry as Aditya & Brinda tell her not to feel bad as Ram is the master of his rhythm.

Brinda tells Vedika that Ram once thought that he wouldn't be able to move on from the pain she caused him after marrying Sashi.

However, he was proven wrong after meeting Priya and got a happy life.

Aditya further adds that Priya, Ram, & Pihu are not made for the games Vedika plays and deserve to be a happy family.

Vedika asks them if he is with Priya currently but Ram's friend diplomatically says that he can be anywhere he wants.

At Sood House, Pihu cuts the cake Ram brings her and asks him to sing a lullaby so she can sleep.

Priya asks Meera Ma if all of this is true and Meera says that it is true since Pihu's stars have written a lot of love from her parents for her.

At Kapoor Mansion, Nandini scolds Shubham for not recognizing Priya after she changed her ugly hairstyle and wore spectacles.

Shubham reverts the question back to Nandini & asks her why she couldn't as well.

Just then, Nandini gets a message from Vedika that Ram is with Priya currently.

Internally, he questions why he feels so happy whenever he is with Pihu & she calls him Mr. Khadoos.

He then tells Lovely that she shouldn't raise Pihu alone and condone her father for not being there for her.

Lovely runs away from Ram who thinks he has hurt her. Ram apologizes and says who wouldn't like to be Pihu's father and Lovely says Ram is like her father only.

Ram further says that even when he is with his family, he feels alone.

On the other hand, Siddharth goes to Vedika's house and taunts her, saying she shouldn't dare come near Ram when Priya's pure love protects him.

Vedika panics and locks herself inside her room.

Meanwhile, Ram asks Lovely where her husband is when she believes so much in love and reveals even though he is her boss, she feels like a close friend to him.

Lovely read Ram's mind & ask him not to feel guilty about all his feelings & also not to worry about Shubham.

If Shubham is truly his brother, he would understand Ram.

The next day, Vedika arrives at Sood House to confront Priya but gets stopped by Pihu.

However, Vedika lies to Pihu and says Ram is going to marry her and she will become Pihu's second Mumma.

Pihu shakes her head & tells Vedika that Priya can only be Ram's princess.

© Copyright tellybest.com, 2022, 2023. All Rights Reserved. Unauthorized use and/or duplication of any material from tellybest.com without written permission is strictly prohibited.
Cached Saved on: Thursday 26th of January 2023 06:38:20 AMCached Disp on: Tuesday 31st of January 2023 07:13:36 PM