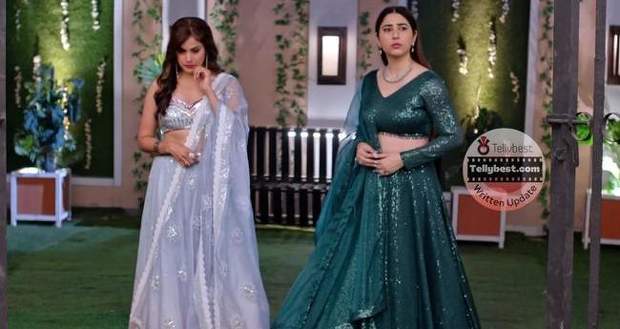 Today's Bade Ache Lagte Hain 2 6th January 2023 episode starts with Priya telling Lakhan that she cares about the truth and that is the reason she has visited Avni.

Shubham plots a plan to divert Priya so that Sid can go talk to Yash.

He calls Priya and pretends as if he has called her by mistake and tells Sid that Ram asked him to buy Vitamin pills for Pihu but if buys the wrong ones, Pihu can get kidney stones.

Priya gets into a dilemma about whether or not she should go back to the house, in case Shubham gives Pihu the medicine.

Priya tells Lakhan that she will be back as soon as possible but now she has to attend to some urgent matter.

After she leaves, Swati scolds Lakhan for misbehaving with Ram and Priya.

Lakhan says that Swati has become like the rest of the people who don't care about him.

As Priya reaches outside Yash's house, she meets with Shubham and Sid.

Shubham asks Priya if she knows about the medication that he is supposed to get while Sid sneaks to go to Avni.

Swati seeks Yash's forgiveness for what she is about to say.

Pihu then complains to Sara that everyone is upset on a function day.

Sara gives the ingredients for Priya's mehendi to Ram and asks him to prepare it.

After Sara and Pihu leave, Aditya says to Ram that he should not involve in Sid's matters.

Ram says that he trusts Priya's gut and thus wants to be extra sure while deciding such a crucial matter.

In the meantime, Sid, Shubham, and Priya enter.

Priya tells Ram that Swati has told the truth.

Meanwhile, Lakhan confesses to Yash that he loves Avni, but he is sorry about creating a scene.

Yash tells Lakhan to leave his house immediately as Swati has told him the truth.

Back at Kapoor's mansion, Priya tells Ram that Lakhan is an alcoholic and has always looked at Avni with a bad eye.

Priya tells Ram that Swati said that on the sangeet night, he was drunk after which Swati broke into a puddle of tears and begged Lakhan not to tell the police about it.

Ram gets infuriated and asks Aditya to keep an eye on Lakhan.

Priya still has a feeling in her heart that Lakhan didn't look drunk that night and maybe Swati was lying.

Ram takes Priya to the room and surprises her with a beautiful dress and accessories.

Ram tells Priya that it is Pihu's idea.

Pihu enters and tells that they have brought everything from the roadside stalls and Ram gave everyone a lot of money because he knows that Priya likes helping people.

Pihu and Priya then tease Ram that he hasn't taken a bath while Ram tells Pihu that everything is fair in love and war.

Priya asks Pihu to leave as now she will have a war with Ram.

As Pihu leaves, Priya takes a pillow and starts hitting Ram with it and says that he should not tell kids all this but Ram holds Priya and pulls her closer.

He says that his love story is no less than any war as he has won her again.

Priya then asks Ram if he misses his mother and Ram says that he had the best mother in the world.

Priya then says that she wants to invite Lakhan's mother to her Mehandi too as she is heartbroken by her son.

Ram agrees with her and says that they will treat her well.

Priya thinks to herself that now she will get the answers to all her questions.

Meanwhile, Lakhan is heartbroken and says to Swati that he can't believe that Swati has shaken hands with his enemies now.

Avni stands at the door and looks at both of them with tears in her eyes.

She moves towards Lakhan and hugs him from behind.

Lakhan asks Avni if she will run away with him.

© Copyright tellybest.com, 2022, 2023. All Rights Reserved. Unauthorized use and/or duplication of any material from tellybest.com without written permission is strictly prohibited.
Cached Saved on: Wednesday 25th of January 2023 06:06:04 PMCached Disp on: Wednesday 1st of February 2023 08:41:45 PM