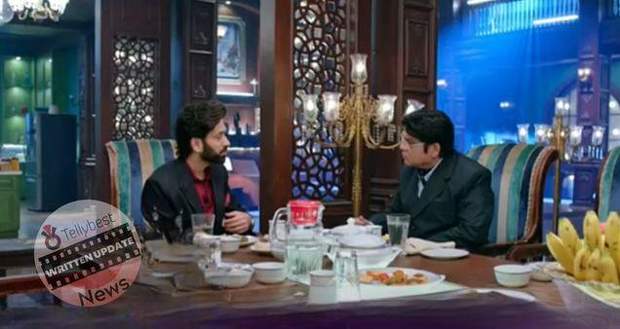 Priya soaks a cotton cloth in water to be put on Pihu’s forehead while Ram gives Pihu cough syrup.

Pihu complains of the cold, damp water but Priya tells her, that she lets Priya keep the cold cloth, otherwise she gets an injection from the doctor.

Unable to see Pihu complain, Ram asks Priya not to use the cold-water method but Priya gives him big eyes, saying it is necessary.

Distracting Pihu by telling stories of her childhood, Priya puts the cloth on her forehead, making Ram get in awe of Priya’s gentle nature.

After Piya goes to make a sandwich for Pihu, Pihu asks Ram about his & Priya’s marriage, making Ram’s eyes light up as he tells Pihu what happened on the day of their marriage.

However, Ram goes in search of Priya outside after Tarun informs him that Priya has gone to buy bread.

He finds her and holds the umbrella above Priya so she doesn’t get wet.

Stroking her damp cheek, Ram holds Priya close to him as both of them walk together slowly under one umbrella.

Both of them arrive at Kapoor Mansion in minutes and Priya dries her hair with a towel.

Ram helps Priya dry her wet cheek as she flicks her hair rapidly and the water droplets fall on Ram’s face.

It is Priya’s chance to soak the wetness with the towel as Ram gets mesmerized by Priya’s beauty.

He takes a bite of the sandwich made by Priya and feeds it to Pihu.

Asking Priya if she enjoyed the rain or not, Pihu tells Priya she cannot go back to Sood House since it is late in the night.

Finding Priya’s old Holi saree in his closet, Ram gives it to Priya to get changed.

Later, after Pihu is asleep, Priya asks Ram if he can drop her off and says they need to tell Pihu they are not together anymore.

Suddenly, Priya starts coughing while Ram spikes Priya’s medicine drink with whiskey to ask her about Ishan later once she is drunk.

Priya drinks it and she starts to loosen up as Ram tells Priya she is very brave.

Priya says she had to become brave since she brought up Pihu alone in this world.

Soon enough, Priya complains of her head becoming heavy while Ram gets alert.

© Copyright tellybest.com, 2022, 2023. All Rights Reserved. Unauthorized use and/or duplication of any material from tellybest.com without written permission is strictly prohibited.
Cached Saved on: Monday 21st of November 2022 02:32:04 AMCached Disp on: Thursday 1st of December 2022 01:19:16 PM