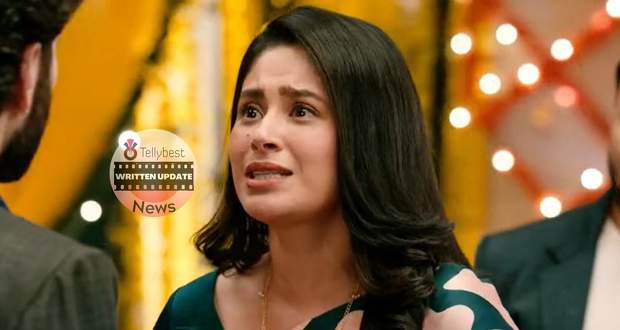 Today's Bade Ache Lagte Hain 2 6th September 2022 episode starts with Priya convincing Pihu that she will enjoy her time with Ram as she will be getting her sandwiches and cupcakes.

Pihu asks Priya if she is really leaving the house and if it will take time for her to come back.

As Priya nods her head and tells Pihu to enjoy her adventure, Pihu runs to Ram and gives a hug to him asking him to take care of her.

Ram caresses Pihu’s face with love and takes her inside with her hand while Priya stands outside crying by herself.

Priya along with Ram’s friends leave the house which makes Nandini, Shubham, and Vedika feel relieved.

Later, Aditya, Brinda, Vikrant, Sarah, Sandy, and Priya gather at a place and discuss how Ram denied believing them instantly.

Brinda says that she worked very hard for the DNA reports because she wanted to see Ram happy but everything got spoiled at the hands of Nandini.

Sarah questions how Shubham and others managed to change the date of the report to 4 days ago and ask if they should inquire about this at the lab.

However, everyone gives up on the situation and says that Ram will not believe them no matter what they do.

Priya comes and questions everyone’s resolve as a friend of Ram after she sees their attitude.

Admitting that it was her fault for leaving Ram with such manipulative people, Priya says that she will fight to make things right.

Priya asks Ram’s friends why they let Nandini emotionally manipulate and blackmail Ram for all these years and did nothing about it.

Aditya, Brinda, and Vikrant get silent as they do not have any answers to Priya’s question.

Priya expresses her concern for Ram who has been toyed by Nandini all these in the name of Shivina and says that they have to put a stop to that.

Living away from Pihu and seeing Ram hate her is hurting Priya immensely, which is what Nandini wants.

Meera decides to talk to Ram but finds that the house is locked and no one from the Kapoor family is at home.

After Meera tells Priya the whole thing, Priya rushes to search for Pihu and almost gets hit by Ram’s car.

Priya tells Ram that she has to meet Pihu instantly and he cannot deny her right as Pihu’s mother.

Ram goes back home and checks for Pihu but finds that no one is at the house as Priya told him.

Getting impatient with anxiety, Priya threatens Ram that she will drag him to court if something happens to Pihu.

Ram blocks Aditya’s number while searching for Pihu along with Priya because he does not want to talk to him.