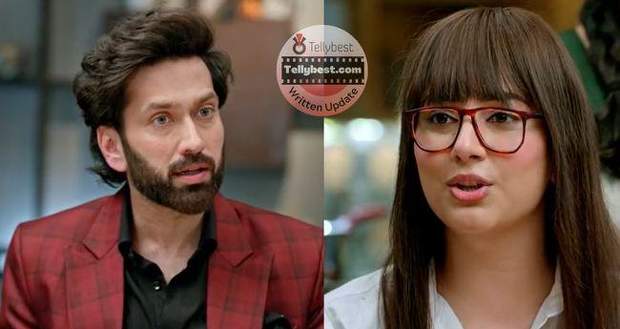 He gets happy to see the meal cooked by Meera Ma and falls in love with the smell of his American Expresso.

Priya gets happy in return and reminds him to take his BP medicine before eating.

Ram's gaze at Lovely becomes serious once he realizes how she takes care of everything.

He then asks Lovely what he should do to placate Vedika.

Lovely calls her his girlfriend again & this time Ram doesn't deny it which hurts Priya slightly.

Ram asks his PA to make a booking of jewelry to be gifted to Vedika while he questions Lovely about Pihu's current education.

Meanwhile, Pihu gets frustrated thinking about Vedika becoming her stepmother and screams that she just wants her Mumma.

Meera gets concerned when a bouquet of flowers and a fluffy toy are dropped at Sood House.

Meera asks Pihu to see who dropped it as she goes to attend to the whistling utensil kept on gas.

Pihu presses the button of the fluffy toy and a voice says that it is gifted by Vedika who will soon become Pihu's stepmom just like Nandini is to Ram.

She taunts Priya for using her money to get a rickshaw & then get Pihu admitted to a school when she should have done Pihu's admission with Ram's memories intact.

Later, Shubham presents his presentation to Mr. Singhania and gets complimented.

Shubham credits Ram for his improvement and doesn't say thank-you to Nandini which hurts her.

Meanwhile, Priya gets to know that Nandini gave big donations to all the schools in the city so Pihu does not gen admission.

A crying Priya confronts Nandini to not ruin Pihu's future as she is a part of the Kapoor Family.

However, Nandini asks Priya to choose between Ram or Pihu while Priya taunts her about Shubham, not saying thank you because he knows Nandini's nature of using people, be, it blood son or stepson.

Once Meera goes inside, Vedika sneaks in, wearing a princess dress and a mask, holding a magic wand.

She threatens of throwing Priya away from Ram & Pihu's life and scars Pihu'vulnerablele heart by holding her puffy mouth tightly.

Pihu tells Meera about Vedika's arrival and her threat.

Meanwhile, Ram is happy about Shubham's meeting and calls Lovely to share this good news but she doesn't pick it up.

He then goes to Sood House directly but finds it locked.

© Copyright tellybest.com, 2022, 2023. All Rights Reserved. Unauthorized use and/or duplication of any material from tellybest.com without written permission is strictly prohibited.
Cached Saved on: Thursday 26th of January 2023 12:54:51 AMCached Disp on: Monday 6th of February 2023 04:47:09 AM