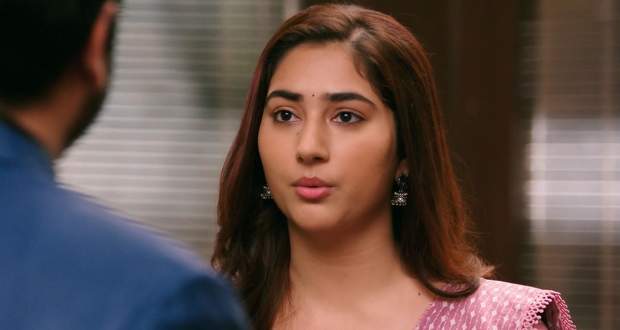 Pihu tells Priya that Ram also talks with her rudely but gets silent when Priya asks her if Ram acted rudely to her earlier.

After asking Pihu to compensate for her mistake, Priya joins Ram in his car where she apologizes to Ram for Pihu’s behavior.

Ram tells Priya in a mocking manner that Pihu is just like Krish, irritating and impolite.

On the way, the rain starts and Priya begins to play with the raindrops by extending her hand out of the window.

Ram thinks that Priya has begun to love rain due to Krish and coldly tells Priya to close the window as the rain is ruining his seat.

Before Priya can close the window, two vendors flock to both Ram and Priya and ask them to buy flowers from them.

Priya agrees to buy the bundle of lilies while Ram buys the stack of roses from the vendor.

Giving Ram the lilies, Priya says that it will be good for them to gift each other flowers to make their act real.

However, Ram throws away the flowers and announces that he no longer likes flowers or rain while closing the windows.

Meanwhile, Nandini warns Sandy for suggesting taking Priya’s help in this matter and makes it clear that she will not let Priya come back to that house.

Sandy replies that Priya will also not stay in that house after that night is over.

In the meantime, Neeraj and Maitri stay back with Pihu in Meera’s house to take care of her.

Pihu watches television on Neeraj’s orders and almost catches a glimpse of Ram’s house where the puja is taking place.

However, Maitri switches off the TV at the correct moment and stops Pihu from watching further.

At the same time, Ram and Priya arrive at the Kapoor mansion and stand at the entrance.

Ram enters the house without Priya while she walks at the same time when a person takes in the picture of goddess Durga.

Nandini acts as if she is having a panic attack and warns Priya that she has not forgiven her yet for her deeds.

Priya makes it clear that she will leave immediately after the puja is over and proceeds to change her clothes to the guest room.

© Copyright tellybest.com, 2022, 2023. All Rights Reserved. Unauthorized use and/or duplication of any material from tellybest.com without written permission is strictly prohibited.
Cached Saved on: Wednesday 25th of January 2023 12:14:05 PMCached Disp on: Thursday 9th of February 2023 08:34:58 AM