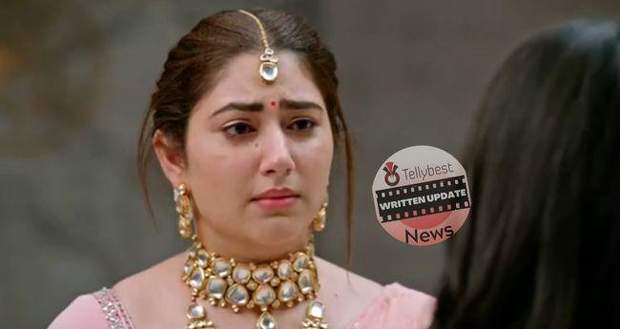 Today's Bade Ache Lagte Hain 2 7th November 2022 episode starts with Pihu calling on Priya's number, having no idea that her parents are involved in a severe car crash.

Meanwhile, Nandini Kapoor loses her mind as Shubham screams at her, asking what they will do now.

Nandini tells Shubham they have to beg Ram for his forgiveness since they cannot live away from his money.

However, Shubham shouts and says they must kill him or Priya since Ram will never forget this.

On the other hand, Pihu & Krish reach the hospital while the doctors rush both Priya & Ram to the ICU.

Krish picks up a crying Pihu in his arms who tells the doctor not to separate her parents.

Adi then asks Krish secretly what else happened at the farmhouse other than Vedika's arrest.

However, Krish tells everyone that Pihu will be alright but they should be worried about Ram since the doctor has said they do not have a definite treatment to heal Ram.

Inside the ICU, Ram is seen having a dream where he is running inside a dark Kapoor Mansion with no lights on.

Vedika faces him and says she is innocent while Nandini & Shubham are the real perpetrators.

Ram calls out for Priya but there is no response.

Vedika tells an anxious Ram that she married Sashi because she wanted a life of luxury while Nandini did not even spare a late Shivina for her advantage.

Finally confessing that she loves him, Vedika comes to hug Ram but he goes to another room where he is faced by Shubham & Nandini.

Ram tells Shubham he does not want to hear from him anymore.

Nandini then laughs evilly in front of Ram, stating she has been trapped in money fraud all his life and he is running away from his reality.

Ram's eyes get teary while Vedika comes again and says this is what Ram's life has been about; only darkness.

However, Meera comes in with Ram's dream and urges him to find Priya who is light inside himself.

The dream ends while Ram breathes out Priya's name as the doctors operate on him.

On the other hand, Meera consoles an upset Pihu that Priya & Ram will be alright as long as she is with them.

Just then, the doctors allow Adi & Vikrant to see Ram inside the ward room since he is out of danger.

Pihu calls Ram her rockstar and asks him to pray to Gannu Ji to heal Priya completely so her surgery is successful too as she is still in danger.

When Pihu says that she wants her Mumma, Ishaan comes and delivers the good news that Priya is out of danger.

Pihu becomes happy and hugs Ram, stating he is truly her rockstar.

Aditya asks her to be with Priya as he will not leave Ram alone.

© Copyright tellybest.com, 2022, 2023. All Rights Reserved. Unauthorized use and/or duplication of any material from tellybest.com without written permission is strictly prohibited.
Cached Saved on: Monday 21st of November 2022 04:33:46 AMCached Disp on: Wednesday 7th of December 2022 04:21:40 PM