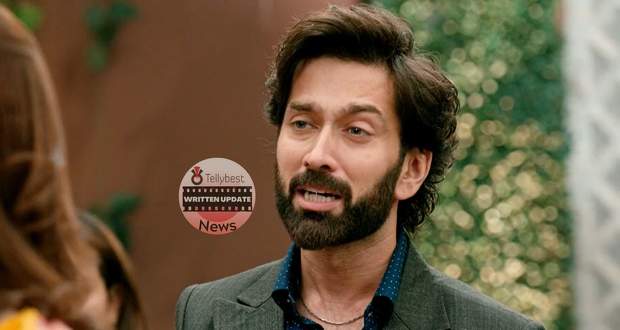 Today's Bade Ache Lagte Hain 2 7th September 2022 episode starts with Priya calling Aditya for help despite Ram denying her to do so.

Aditya promises Priya that he will help her in finding Pihu while Ram continues to glare at Priya.

Everyone gets shocked to see that Nandini is the one who has taken Pihu with her and decides to help Priya in tracking Nandini’s location.

Ram and Priya reach near the farmhouse and argue with each other about where Pihu might be.

Meanwhile, Sandy calls Shubham and tells him that she is on his side and answers Shubham’s questions regarding Priya.

Krish succeeds in tracking Shubham’s location and informs Priya about Nandini and her gang being at a resort.

Ram and Priya argue with each other about driving the car as Priya claims that she will drive the car instead of him.

Priya informs Ram about the location and asks him to drive there as soon as possible so that they can find Pihu.

Meanwhile, Nandini receives the call on the service phone and it turns out to be Ram on the other side.

Ram asks Nandini where she took Pihu without informing anyone and Nandini becomes nervous on hearing Ram.

Nandini says that she got frightened that Priya will take back Pihu from her which led her to take that step.

Ram gets convinced by Nandini’s fake nervous tone and asks her to relax as he gets what Nandini wanted to do.

Priya tries to make Ram understand that Nandini was trying to kidnap Pihu by taking her with her by lying to her.

A big argument breaks in between Ram and Priya where Priya tells Ram that Nandini was aware that Pihu is Ram’s daughter.

Priya says that she lied about Pihu to Ram on Nandini’s commands but these words fail to convince Ram.

Ram replies that Nandini was busy remorse her loss of Shivina at that time and even if something happened, it was Priya’s choice to do so.

It was Priya who chose to lie to Ram and keep him away from his daughter all these years.

Priya apologizes to Ram about that matter but Ram asks Priya not to come with him anymore toward Pihu as he does not want her near Pihu.

© Copyright tellybest.com, 2020, 2021. All Rights Reserved. Unauthorized use and/or duplication of any material from tellybest.com without written permission is strictly prohibited.
Cached Saved on: Sunday 2nd of October 2022 12:04:03 AMCached Disp on: Wednesday 5th of October 2022 04:40:18 PM