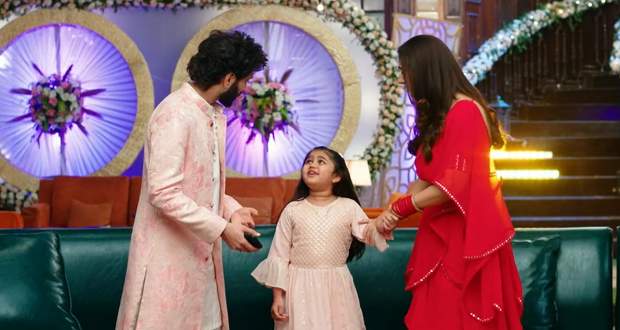 Today's Bade Ache Lagte Hain 2 8th August 2022 episode starts with Priya trying to eavesdrop on Nandini and Shubham’s conversation while getting back her phone from Tarun.

Priya understands that the slippery accident took place because of Nandini after she finds out that the messages have been deleted from her phone.

Just then, Priya hears the screams of the Pihu from their room and goes there to discover Ram and Pihu pillow-fighting with each other.

Ram tries to attack Pihu while Priya protects her by standing in front of Pihu but Ram mistakenly hits Priya with the pillow.

While trying to attack Pihu, Ram accidentally falls on Priya and freezes in that position while staring at Priya’s eyes.

Pihu screams in joy at winning the game and makes Ram confess that he has lost the game while she has won.

Pihu requests Ram to sleep with her on the same bed but Priya somehow convinces her to sleep separately as she will spend the next day with Ram.

At midnight, Priya has a conversation with Krish through messages where Krish asks about the situation and promises Priya to bring proof against Nandini.

Priya goes downstairs to refill her jug and finds Ram in the living room trying to fill out a questionnaire about Pihu.

The doctor informs Priya through a phone call that her suspicion about someone trying to hide the truth was correct and it was Shubham who came to him.

On the other hand, Nandini sends an anonymous message to Ishaan saying that she knows about his truth of pushing Shivina.

Suddenly, the police arrive with Shubham as he is caught by them while driving after drinking.

Ram apologizes to the police and requests them to let go of Shubham this time, which they agree to.

Priya understands how Nandini and Shubham are taking advantage of Ram’s goodwill and is determined to prevent that from happening.

The next day, Sarah asks Ram to do her Kanyadaan as he is the only person she can turn up to in need of help.

© Copyright tellybest.com, 2022, 2023. All Rights Reserved. Unauthorized use and/or duplication of any material from tellybest.com without written permission is strictly prohibited.
Cached Saved on: Monday 21st of November 2022 12:22:17 PMCached Disp on: Thursday 1st of December 2022 11:20:20 PM