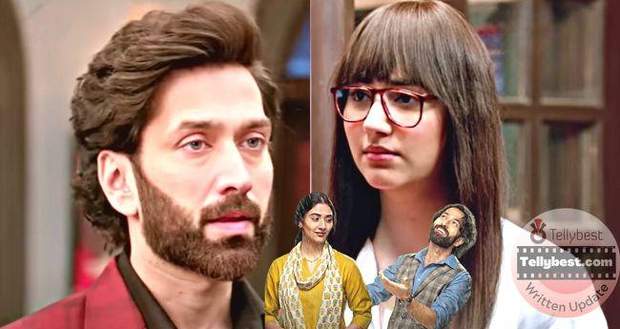 He then goes to see her at Sarah's bakery while Sarah is busy baking a cake for a client.

However, Priya enters the cafe and brings an instantaneous smile to Ram's face.

He hugs her without hesitating and mumbles that they are the best team in the world.

Meanwhile, Krish comes to meet Priya, and his phone beeps while Ram and Priya hug each other tightly with their eyes closed.

He goes outside thinking about who the guy is and decides that he could be Lovely's boyfriend or even husband.

At Lover's Cafe, Krish comforts Priya and asks her not to think about Nandini's empty threats.

Priya tells Krish that Nandini Kapoor will meddle in Pihu's happiness but Krish is of the opinion that since Ram is here, everything will be alright.

Just then, Priya notices that Ram forgot his phone and Ram also comes inside to search for it.

However, since Krish tells Priya in a raised tone that he will not help a defeated Priya who is scared of Nandini, Ram thinks that he is screaming at Lovely.

He comes for her defense and tells Krish that he shouldn't talk to Lovely like that as she is a single mother and a great person.

Ram even tells Krish that he is fighting with Lovely just because he saw them hugging but it was a gesture of excitement.

Before leaving, Ram tells Krish to be there for Pihu while Priya cries slightly.

Ram gives her a handkerchief and says not to waste her tears for people who do not care, but rather fight for herself.

Krish smiles after Ram leaves & asks Priya if she is still willing to leave this fight or will fight for both, Ram & Pihu.

Pihu tells Priya she does not want to choose between her or Ram and Meera tells Priya whatever Vedika did.

Priya gets angry while Meera asks her to stand strong & win this fight.

She then goes as Priya to Kapoor House to have a "lovely" talk with Nandini.

Priya informs Nandini that Ram is funding Pihu's education after opening a trust fund in her name and shows her the papers.

Plus, Priya gives the taste of her own medicine to Nandini, saying she doesn't use Pihu and threatens Nandini to bring her on the roads.

Meanwhile, Aditya gives the diamond necklace Ram asked him to buy for Vedika.

Ram then tells Aditya about Pihu who reminds him of the bright light & future.

Aditya whispers that she is Ram's light but dismisses it.

However, after Adi leaves, Ram is seen whispering to himself how can he forget about Pihu, never ever.