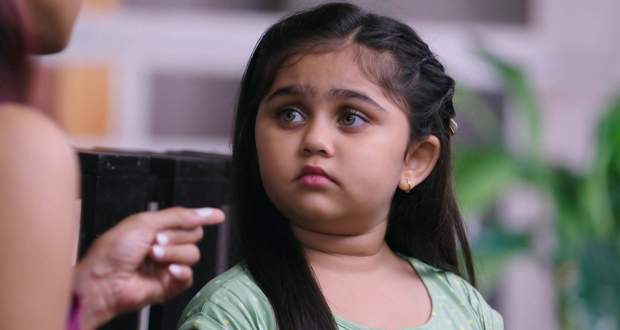 Maitri asks Pihu why she talks about her Mr. Kharoos all the time if she despises him so much.

After thinking a bit and remembering the incidents with Ram, Pihu says that Ram is not that bad of a person.

Pihu recalls how Ram gave her water when she faked her asthma attack and found her medicine box earlier too.

As Maitri hears Pihu talking about Ram’s grey eyes, she asks Pihu to look at her own eyes in the camera but stops midway as Pihu can suspect things.

Neeraj talks with Vedika on the phone and tells her that he will ensure that Pihu does not leave the house.

Meanwhile, Ram tells Vedika that he is anxious about everything going haywire because Priya is coming back here.

Vedika says that Priya is there for a few hours and will leave after saving the deal.

Just then, Priya comes down the stairs wearing a vermilion saree making Ram freeze in his spot busy staring at her.

However, Ram soon comes to his senses and begins to compliment Vedika to make Priya jealous.

Priya comes to Ram, Aditya, and others and asks what she shall do next.

Shubham comes with Sandy and tells them that he has invited a bigger minister to the jagrata so that the minister cannot disobey his senior’s orders.

Ram and Priya speak to the media and tell them how glad they are to come back together again.

After the interview, Ram and Priya proceed to do the arti which Vedika tries to ruin by turning on the AC.

However, Priya and Ram both guard the Diya against getting extinguished by cupping their hands around it.

Later, Ram asks Meera to tell Kathas to everyone, which she gladly does.

After the minister question Priya’s belief in God, Priya narrates the story of Ram going berserk when a store manager accused her of being a thief.

The higher rank minister comes and says that he has not seen a more caring and loving husband than Ram.

Kanika announces that it would be great if Ram was actually such a person.

© Copyright tellybest.com, 2020, 2021. All Rights Reserved. Unauthorized use and/or duplication of any material from tellybest.com without written permission is strictly prohibited.
Cached Saved on: Sunday 2nd of October 2022 06:30:22 AMCached Disp on: Wednesday 5th of October 2022 05:25:39 PM