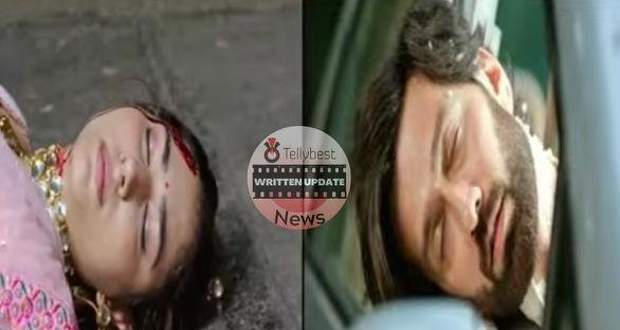 However, the doctor asks Ram to rest.

Meanwhile, Pihu goes to Priya's room and sees her still unconscious on the bed.

Pihu sweetly tells her mother as if she can hear, saying Mr. Khadoos' prayer has power.

She tells Priya to wake up just like him, otherwise, he will make fun of her.

On the other hand, Nandini requests the doctor to let Ram see Priya and Aditya takes him to Priya's ward room in a wheelchair.

However, as soon as Ram enters the room, he looks at Aditya in confusion, saying who are these people.

Nandini's eyes widen in shock along with Krish when Ram asks Aditya to take him to Vedika.

Pihu gets sad while everyone else gets confused as to why Ram is not remembering anything.

Ram asks Aditya whether Vedika is alright or not after marrying Sashi.

Outside the wardroom, Brinda asks the doctor anxiously what has happened to Ram while the doctor says he has been through some kind of emotional trauma.

Nandini then asks Shubham to bring Vedika to the hospital, making the doctor agree as well.

The doctor states since Ram's condition is vulnerable, they shouldn't do anything against him.

Meanwhile, Meera cries while Sarah informs Krish that Nandini must be behind all of this since she wants to distance Ram away from Priya & Pihu.

On the other hand, Shubham drives Vedika to the hospital, telling her that Ram misses her while Vedika says Ram isn't the one to send her to jail, only Nandini.

Krish tells Meera not to worry since RaYa's love will never let them stay apart, not in Pihu's presence.

Pihu then goes to check on Ram who is eating food quickly.

Ram notices her and asks Pihu if she wants to eat Ras Malai too while Pihu says he can eat it since he also likes it.

However, their conversation is cut short as Vedika enters Ram's room, surprising him.

Ram instantly asks her if she is good with Sashi while Vedika scolds Pihu to get out of the room.

Meera comes & shields Pihu and wishes Ram good health as she takes a crying Pihu outside.

Meanwhile, Vedika and Ram walk in the hallway together outside Priya's wardroom when she tells him she only wants him, not Sashi.

Ram volunteers to talk to Sashi since Vedika cannot annihilate her marriage just like this.

Ram peeps through the window and calls the doctor to rush while Vedika tries to get Ram away from Priya.

Meera gets informed by the doctor that Priya is alright now and is coming awake.

© Copyright tellybest.com, 2022, 2023. All Rights Reserved. Unauthorized use and/or duplication of any material from tellybest.com without written permission is strictly prohibited.
Cached Saved on: Monday 21st of November 2022 01:33:07 AMCached Disp on: Thursday 1st of December 2022 12:30:50 PM