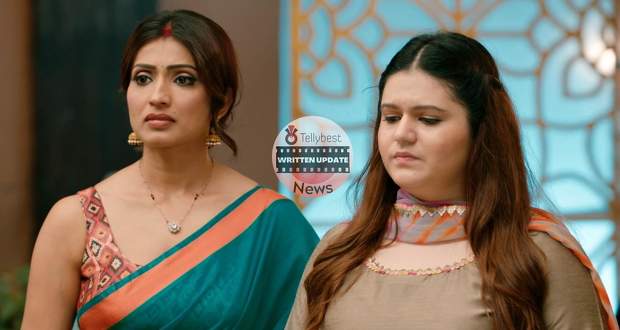 Today's Bade Ache Lagte Hain 2 8th September 2022 episode starts with Pihu sitting alone in a room and waiting for Ram to arrive so that she can have a fun adventure with him.

Nandini asks Tarun to take exclusive care of Pihu which surprises Shubham a bit as Nandini could not stand Pihu earlier.

However, Nandini explains to Shubham that Pihu is the tool that will ensure that Priya does not come back into Ram’s life.

Ram will never forgive Priya for keeping Pihu separate from him for those 5 years.

Pihu hears this and tells Nandini that she is very mean when Ram arrives there and encloses Pihu in his arms for a hug.

Nandini acts as if she cares for Pihu very much and clicks pictures with her before Ram takes her with him.

Meanwhile, Priya comes back to the Sood residence where everyone asks her about Pihu.

Priya tells everyone that Pihu is with her father currently who will take sufficient care of her from his heart.

After everyone leaves for the Ganpati puja the next day, Priya hesitates to call Ram as she wishes to talk with Pihu.

Ram and Pihu sit for the planning of Ganesh Chaturthi and Ram proposes to Pihu that they shall go shopping together.

Pihu does not tell Ram about her and Priya’s tradition of making their own idol of Ganpati from moulding flour because she thinks that Ram will get hurt.

After Ram and Pihu do their shopping and return, Ram asks Pihu to give him the shopping bags, but Pihu refuses.

Ram decides that he will tell Pihu that he is her father the next day after the puja so that he can openly address her as his daughter.

Later, Pihu sneaks into the kitchen and takes a chunk of moulded flour from the bowl so that she can sculpt her own Ganpati.

On the other hand, Priya contemplates whether to call Pihu or not after she moulds a Ganpati from flour in the Sood residence.

Meera explains to Priya that she has all her rights over Pihu as her mother, which are the same as Ram.

Priya sets her mind that she will do the puja along with her daughter the next day and will wait for God until that happens.

© Copyright tellybest.com, 2020, 2021. All Rights Reserved. Unauthorized use and/or duplication of any material from tellybest.com without written permission is strictly prohibited.
Cached Saved on: Friday 30th of September 2022 06:19:09 PMCached Disp on: Saturday 1st of October 2022 01:38:23 AM