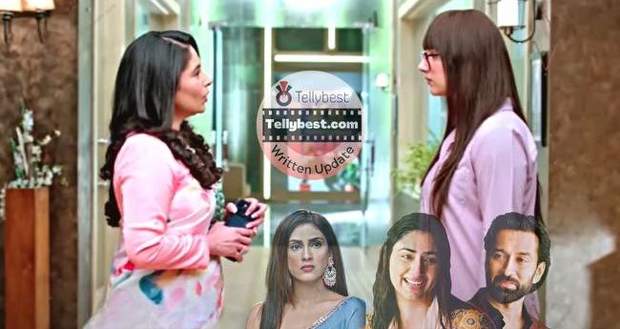 Vedika acts to lose her balance so that Ram catches her from falling and gets close to her.

As Ram asks Vedika why she drank so much, Vedika replies that she is upset after she discovered that Ram did not come to her for help.

Ram says that this is not something to be upset about while Vedika plays her emotional card of being a victim and tells Ram how Sashi used to verbally abuse her by saying she is useless.

Vedika asks Ram if she is useless, to which Ram replies that she is not.

Taking that opportunity, Vedika asks Ram why he did not come to her when he needed help as she is always ready to help him.

Ram replies to Vedika by saying that they both know their different needs and he found Lovely as the suitable person to help him.

To uplift Vedika’s mood, Ram gifts her a necklace made of diamonds which stops Vedika’s tears immediately.

Vedika asks Ram to make her wear that necklace himself which Ram follows with a bit of hesitancy.

After Ram is done with the necklace, Vedika clings to him and says that she loves him from the bottom of her heart.

On hearing the phrase, “I love you”, Ram remembers the splitting image of Priya and replies with “I love you, Priya”.

Vedika gets shocked to hear that sentence from Ram & Ram suddenly faints on the sofa making Vedika scream in horror.

Meanwhile, Priya wakes up from her sleep and feels as if something is wrong with Ram.

Just then, Sarah calls Priya and informs her that Ram has fainted suddenly and the doctor has arrived at the Kapoor household.

The doctor asks the family members with whom Ram was last before he collapsed to which Vedika responds that they were together.

Vedika takes Nandini to a corner and informs her that Ram said “I love you, Priya” before he fell unconscious.

Nandini gets shocked to hear this and says that they cannot let Ram remember anything from the past.

Vedika points out that Ram wants to be friends with Lovely which is making them lose against Priya in the present scenario too.

The doctor asks the family members about Ram’s medicines, and Nandini and Vedika both say they do not know.

Lovely enters the house despite Shubham trying to stop her and gives the doctor the prescription that has been helping from the beginning of the treatment.

Lovely says that she does not use people to her advantage and throws them, thus, mocking Nandini and Vedika.

Even after Nandini and Vedika ask Lovely to leave the house, Priya says that she will stay till Ram regains consciousness.

As Vedika tells Lovely that Ram confessed his love for her by giving her that necklace, Ram says “I love you, Priya” in his sleep.

Aditya and Vikrant take Nandini, Shubham, Sid, and Vedika downstairs and try to convince them to allow Priya to stay there.

Priya comes and says that Ram remembers only her in his unconscious state and it is necessary for her to be there.

As Priya asks Nandini if she will let her vengeance take a toll on Ram’s health, Nandini walks off followed by her minions (Vedika & Shubham).

© Copyright tellybest.com, 2022, 2023. All Rights Reserved. Unauthorized use and/or duplication of any material from tellybest.com without written permission is strictly prohibited.
Cached Saved on: Wednesday 25th of January 2023 08:04:14 PMCached Disp on: Tuesday 31st of January 2023 07:48:13 PM