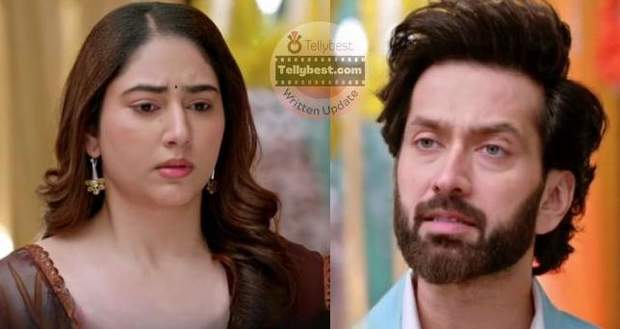 He tells Avni that he will be waiting outside the Kapoor mansion for her during the Mehandi ceremony.

Meanwhile, Swati packs all her belongings and at the same time feels guilty about betraying Lakhan.

She feels helpless and begs for a miracle to happen.

Mrs. Khanna enters Swati's room and gives her the phone to talk to someone.

When Swati picks up the phone, Ram answers from the other side making Swati's heart, ache.

Ram says that he is also a son and thus he can't let a mother weep at her son's deeds.

He then invites her to the Mehandi ceremony and says that she can bless the union as a mother.

Swati breaks down and starts thinking about what will Nandini do if she finds out.

Veena persuades Swati to along with her, and Swati has no option left other than to say yes.

Back at the Mehandi celebration, Aditya calls Vikky and says that he is afraid that Ram is taking a wrong decision but Priya interferes and asks them what are they talking about.

Aditya and Vikrant change the topic and start talking gibberish.

Concurrently, the Khanna family and Swati reach the Kapoor mansion.

Swati covers her face and says that she feels awkward being around the Kapoor family because of the incident.

Veena says that she can cover her face if that makes her comfortable.

Avni's mind is in conflict when she receives a message from Lakhan telling her that he will wait for her outside in 20 minutes.

Meanwhile, Sid tells Ram that the Khanna family has arrived.

Ram goes along with him to greet them.

Ram happily welcomes the family and spots Swati, he thinks that Swati is getting conscious and that is why she has covered her face.

Aditya comes and asks Ram to go along with him as he wants to discuss some official matters.

Ram excuses himself and goes along with Aditya.

Back at the Khanna's house, Lakhan writes Swati a letter saying that if he loses Avni then he will lose himself. He writes that he is not leaving her and will return soon.

Meanwhile, Aditya asks Ram to think before signing the papers because he doesn't trust Sid and Shubham entirely.

However, Ram insists that he knows what he is doing and has thought everything through.

Ram says that he will name everything after Priya because he doesn't trust Nandini.

After a while, Ram goes to his room and starts talking to a picture of Swati.

Swati overhears him outside his room and mistakenly assumes that he is talking about Nandini.

She bangs on his door and tells him that she is Lakhan's mother.

She says that she wants to talk to him from outside as she will not be able to look him in the eyes.

Swati says that Lakhan is not as bad as he thinks and requests him not to think ill of her.

Ram says that he understands her emotions but Lakhan not only embarrassed Avni but also threw an old man against a car and threatened to kill him.

Swati tells Ram while crying that Lakhan is not a bad person, he only did that because that man was cheating on his wife.

Swati continues to tell Ram that Lakhan has seen a lot of difficulties throughout his life and that has made him irritable.

She says that Lakhan needs a brother like Ram to tell him the difference between right and wrong.

She begs Ram to give Lakhan another chance.

© Copyright tellybest.com, 2022, 2023. All Rights Reserved. Unauthorized use and/or duplication of any material from tellybest.com without written permission is strictly prohibited.
Cached Saved on: Wednesday 25th of January 2023 10:50:43 AMCached Disp on: Wednesday 1st of February 2023 09:31:51 PM