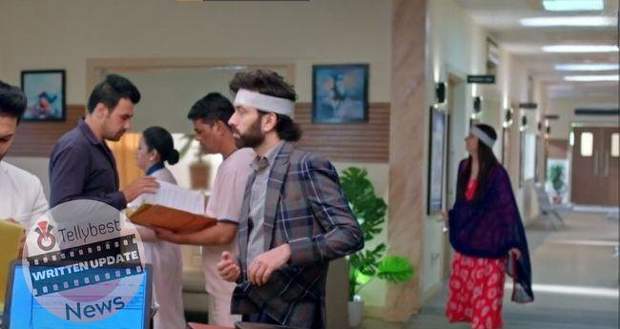 Vedika warns him to rest first, otherwise, she will complain to Nandini.

Meanwhile, Priya wakes up and instantly asks Meera where Ram is but Meera lies to her, saying Ram is sleeping.

However, Priya is adamant, thinking the emotional trauma Ram must have gone through is much more than the physical hurt.

Ram tells Vedika he just wants the little girl’s mother to be alright.

Meanwhile, Priya tells Meera if she cannot talk to Mr. Kapoor, she can at least see him.

Removing all the tubes and pipes attached to her body, Priya leaves the bed and goes outside Ram’s wardroom.

However, her hand knocks a medicine box outside, warning Vedika.

Brinda comes to save the day & scolds Priya for waking up instantly after her surgery.

Brinda also scolds the doctor and asks him to put Priya back in her bed.

After Priya leaves, Ram comes outside his room to see what the commotion is all about.

Vikrant informs him that the little girl’s (Pihu) mother is well now while Ram thinks about not seeing her again and sheds one single tear.

Meera, Sarah, Vikrant, & Brinda all help Priya get back onto her bed.

Priya then asks Meera to tell her honestly if Ram is hurt or not.

Brinda asks Priya not to worry while Priya agrees to be positive for Ram.

On the other hand, the manipulative Nandini talks with Ram, asking him if he wants to get back together with Vedika.

Ram says he is not thinking about Vedika currently but the little girl’s tears whom he saw today.

At Sood House, Pihu dreams about Mr. Kapoor coming to her and waking her up softly.

However, it is all a dream and she shrieks, as Sandy comes to console her.

Later, Vikrant helps Ram get discharged from the hospital separately while an anxious Priya asks the nurse if Ram is discharged or not.

The nurse tells Priya to go back to her room & wait for Krish but she doesn’t.

When she finds Ram’s wardroom empty, she gets confused, thinking about how could he go without meeting her.

As Ram stands at the reception, he asks Vikrant if they can help the little girl in any way as her image is replaying in his mind constantly.

Vikrant feels happy inside since slowly, Ram can retain his memories since his heart remembers Priya & Pihu.

Just then, Priya comes there and her dupatta falls on Ram’s back.

An accumulation of flashbacks occurs in Ram’s mind where Priya’s dupatta has fallen on him but it is all a blur.

He gets a call from Nandini & leaves, making Priya cry.

Priya then asks Krish to tell her the truth and take her to Ram since he just left, ignoring her completely.

© Copyright tellybest.com, 2022, 2023. All Rights Reserved. Unauthorized use and/or duplication of any material from tellybest.com without written permission is strictly prohibited.
Cached Saved on: Monday 21st of November 2022 05:16:57 AMCached Disp on: Saturday 10th of December 2022 02:22:16 PM