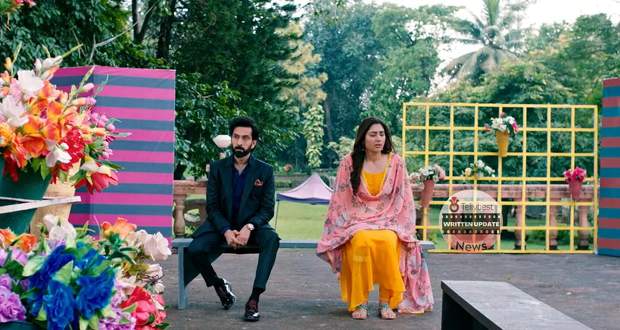 Today's Bade Ache Lagte Hain 2 9th September 2022 episode starts with Ram, Pihu, and everyone else in the family gathering together for dinner.

Ram jokes about his childhood memories so that he can make Pihu laugh, which he succeeds in quickly.

However, the atmosphere gets ruined after Ram complains to Tarun about a smaller number of rotis for dinner.

Tarun tells Ram about the disappearance of the flour from the kitchen making Pihu nervous inside.

Vedika accuses Tarun of trying to steal the flour which causes a major uproar among the family members.

Ram asks Vedika to stop blaming Tarun for such a small thing and tells him to prepare more flour immediately.

Seeing all that, Pihu gets nervous that she will get scolded heavily once Vedika finds out that she was the one who took the molded flour.

Meanwhile, Priya prepares modaks for Pihu but hesitates to call Ram so that she can meet Pihu and feed them to her.

Sandy encourages Priya and calls Ram instead of her to inform him about the plan.

Ram says he will buy the tastiest modaks from sweet shops but does not want Priya to come over there.

Priya tells Ram that the bought modaks will not have the taste of a mother’s lover while Tarun comes over on the other line.

As Tarun informs Ram that Pihu is nowhere to be found in her room, Priya gets nervous and asks Ram to search for her while she arrives there.

After Ram hangs up, Tarun tells him that the main door is open and that Pihu might have escaped outside all by herself.

Ram rushes out to find Pihu while Vedika accompanies him so he cannot contact Priya.

Meanwhile, Pihu yearns to go back to Priya as she does not want an adventure with Vedika near her.

Pihu feels sorry for Ram as she wants him to stay close to her but she misses Priya at the same time.

Ram’s car stops midway, and he and Vedika start to search for Pihu on foot.

After a few minutes, both Priya and Ram spot Pihu at the same time and save her from getting hit by a car.

Pihu gets happy to see Ram and Priya together and tells Priya how she missed her all the time.

Hearing Pihu say those words to Priya, Ram feels hurt and thinks that Pihu cares for Priya instead of him.

Vedika rubs salt on Ram’s wounds by saying that he would have been closer to Pihu only if Priya hadn’t separated Pihu from him.

However, Ram gets silenced after Pihu demands to go home along with Priya so that she can spend Ganesh Chaturthi with both of them.