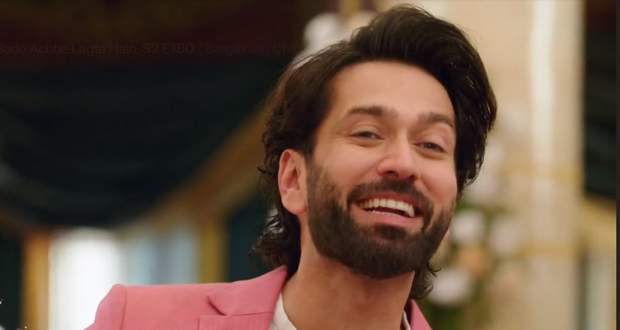 In the kitchen, Priya and Sara realize that Shivina has messed up with the recipe and has added fish to a cake.

Shivina takes the cake in front of everyone while Priya and Sara worry thinking that Ram will fall sick if he eats this so-called fusion cake.

When Shivina tries to feed the cake to Ram, Priya jumps in and eats the bite.

Priya's taste buds go through their worst experience while she eats the chocolate and fish together.

By doing so, Priya saves Ram's stomach without hurting Shivina.

Suddenly, Priya feels sick and gets a sensation of vomiting.

Ram gets worried but Sara takes Priya to the room.

Meanwhile, Varun enters Ram's suite disguised as staff and gets hold of the share-transfer papers hidden in the suite's locker.

At the same time, Sara arrives there along with Priya.

So, Varun hides it in Sara's bag and escapes from there.

On the other hand, Sandy concludes that Priya is sick because she is pregnant.

Later, Varun tries to talk nicely to Sara and take her bag but fails to do so.

Meanwhile, Ram goes to meet Priya with a cup of ice cream and the belief that he is going to be a father.

While Ram and Priya have a conversation, Ram wrongly concludes that Priya is pregnant.

Further, Ram mentions announcing it to the family, and Priya agrees thinking that Ram is going to inform everyone about his decision for Ishaan.

However, after coming downstairs, Ram announces Priya's pregnancy which leaves her stunned.