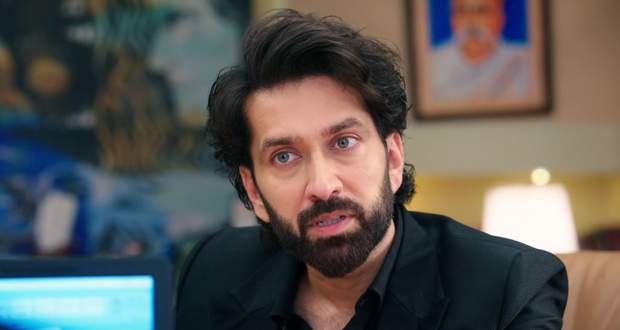 Priya notices that the mysterious guy knew that Ram will come to the office directly and was also aware of the position of the cameras.

Meanwhile, Ram gets a message from the guy to meet him at Priya's bakery.

Later, Priya gets a call from Sara who informs her that Ram has a meeting at the bakery.

Priya also finds out that the guy is at the bakery too.

So, she leaves for the bakery right away.

When the guy and Ram reach the bakery, Ram addresses him as Krish Dixit.

Ram narrates Krish's story about him being a private detective who does sting operations on influential people.

When Ram goes to get cupcakes for himself, Priya calls on the bakery's landline.

Krish picks up the receiver and keeps it away.

Priya overhears him talking on the call about attacking someone if he does not listen to him.

Hearing this, Priya concludes that the guy is going to hurt Ram.

As soon as Priya reaches the bakery, she hits Krish with her bag.

At the same time, Ram comes back.

Krish asks Priya why she hit him while he addresses her as Priya Sood.

Taking a closer look, Priya asks him whether he is Krish Dixit.

Ram gets confused to see that Priya and Krish know each other.

Priya says that they went to the same college.

There, Krish says that he was following the case of Ram's father's accident.

Priya requests Krish to be confident before giving any hope to Ram.

In the meantime, Ram tells his friends that Krish maybe her college-time crush.