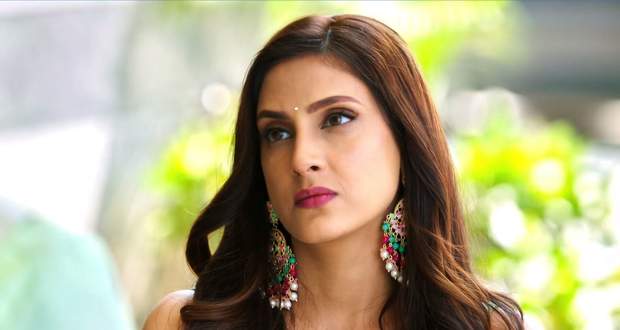 Today's Bade Ache Lagte Hain 2 16th March 2022 episode starts with Nandini replacing the saree that Ram has ordered for Priya with the saree selected by Vedika to create more misunderstandings.

On the other hand, Brinda arrives at Priya's room and gives the gift to Priya.

Nandini decides not to let Priya meet Meera in isolation because Priya will mention the suspicious messages on Ram's laptop.

After some time, Sara calls out Priya's name.

Hearing it, Ram flashes back through all the moments when he was left stunned seeing Priya walk down the stairs.

However, Ram gets devastated to see Priya in her regular dress and tied hair for the interview.

On the other hand, as Ram behaves normally in front of the media, Priya recalls the messages and relates them to his behavior.

In the meantime, Nandini sends Vedika and Mamiji to search for the bangle in Akshay's room.

Finally, when the interview starts, the anchor asks why is Priya wearing a simple dress.

Before Ram could say anything, Priya speaks up that sometimes things are expensive with memories instead of money.

Similarly, the dress Priya is wearing is from her first meeting with Ram.

As the interview proceeds, Nandini awaits the moment when Priya mentions the cheating done by Ram mentioned in the message.

However, Priya keeps up with everything Ram says but taunts Ram indirectly which only Ram understands.

Further, the anchor asks RaYa (Ram and Priya) to play a game of Pictionary.