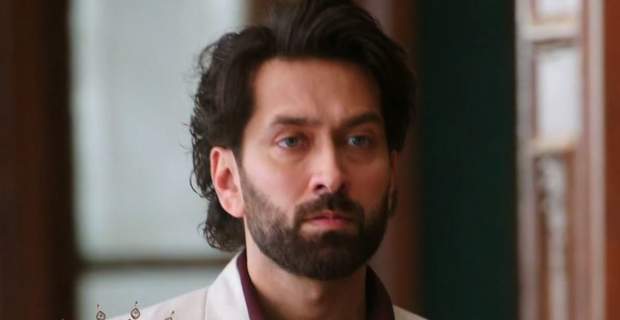 Today's Bade Ache Lagte Hain 2 17th March 2022 episode starts with the anchor and others preparing for the game.

At the same time, Akshay walks up to Ram and Priya and apologizes for his mistake.

However, Priya says that she isn't upset and everything is fine.

When the anchor returns, she explains the game to Ram and Priya wherein one person will draw on the board and the second person has to guess what it means.

Priya makes a drawing of Akshay and Shivi's wedding at the temple while Ram and Priya stand beside them holding hands.

In her mind, Priya thinks what Ram will make out of it.

When Priya wonders whether Ram will mention the word BFF which he had given her.

Suddenly, Ram says that the picture depicts BFF, the bond that Ram and Priya share.

Priya is amazed by Ram's right answer but explains her heart not to get carried away by one correct explanation.

Meanwhile, Nandini asks Vedika to come downstairs to execute another plan of theirs.

At everyone's request, Priya continues the game and she makes the drawing of her and Ram in the rain.

For Priya, it means lying because Ram lied to her for the first time and she was going to use the rain to find out about it.

Without any delay, Ram says the word 'lies' and confesses that he had lied to her.

Further, the anchor reverses the roles.

Thinking that she can be mistaken, Priya brings a smile to her face.

Brinda tells Ram to say 'I Love You' through his drawings and asks him to say that it is a movie.