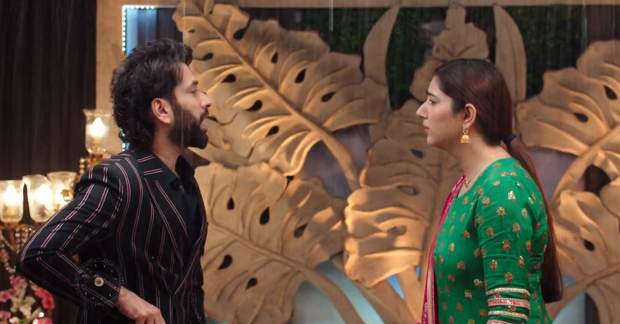 Today's Bade Ache Lagte Hain 2 19 January 2022 episode starts with Priya talking to Ram that she loses whatever she loves.

Ram explains that Priya’s father as well as funny Neeraj does not deserve Priya.

Suddenly, there is a sudden outburst of rain. Ram tries to enjoy the rain but Priya stops him saying the rain is infectious.

Ram later shows the coupon that Priya gave him that she will enjoy the rain one day with him.

On the other hand, Shashi confronts Vedika for her closeness with Ram for money and how Vedika is spoiling Shashi’s image in front of everybody.

Vedika claims that nobody can do any harm to her as Ram is with her but Shashi denies believing it.

Meanwhile, Ram counts the goodness of Priya and asks Priya to enjoy the rain.

Ram asks Priya to feel the raindrops and they enjoy a romantic moment with the background music playing the “Kabhie jo Badal barse” song.

Feeling Ram's closeness, Priya enjoys the rain with him.

Ram gets surprised when Priya says that she loved the rain.

Afterward, when Ram cautions Priya from falling Priya confidently says that Ram is there to hold her.

Later, Vedika and Shubham fume in anger as things are getting out of their hands.

They plan to use Raj to get to Anjali so that Shubham can earn his brother’s trust and Vedika can earn Ram himself.

The next day, Shubham comes to Priya’s room to check upon Priya and asks for a fresh start in their relationship.

At the same time, Ram hurriedly finishes his work.

Meanwhile, Shubham bribes Raj with food and offers to promote him if he works for Ram, as Raj works for Shashi and Shashi works for Ram.

Spilling the beans, Raj tells that he was following Anjali last night and Shubham asks him to take him to Anjali.

Back at the office, Ram tells Adi how his birthday makes him remember his father and his love for Vedika.

Further, Ram also adds that he did not have the same feeling last night instead he was worried for Priya this time.

In the other scene, Shubham fools Raj by talking to Vedika in name of Ram.

In the meantime, Priya apologizes to Anjali for not meeting her last night and asks Anjali to come to her office, to tell the truth.