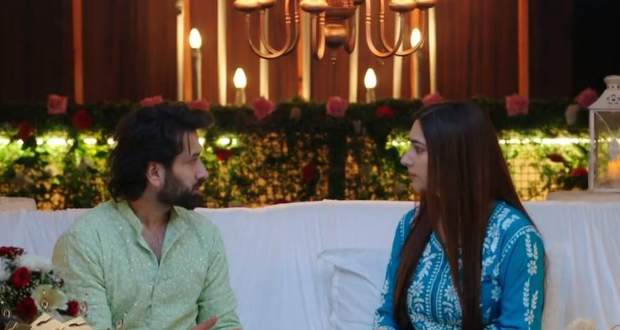 Vedika asks Akshay to stay within his limits and makes him think that Ram does not wish to give both the bangles to Priya.

However, when Akshay comes back, he hears Ram saying that he has preserved the second bangle for Shubham's wife.

After the ritual ends, Nandini comes to Ram to thank and apologize to him.

The reason for the apology is shown in a flashback where Nandini showers her crocodile tears and lies that she misplaced one of the bangles that were the last sign of Ram's late mother.

Though Ram is upset by the accident, he melts seeing Nandini's tears.

At present, Akshay is suspicious of Vedika's behavior towards Ram.

So, Akshay decides to stay in the Kapoor mansion to find out the truth.

On the other hand, Priya tells Ram that she had planned a date for them but the plan flopped as there was no rain.

Accidentally, while talking, Priya confronts Ram about knowing that he lied about being at the office.

Further, Priya gets surprised when Ram starts answering every question that Priya is imagining in her mind.

Suddenly, Ram sees a box of Kachoris and says that he didn't know about her painful past associated with them.

Priya says that she bought these Kachoris because now they do not remind her of the past in fact they make her recall how she was gifted something on Valentine's day for the first time.