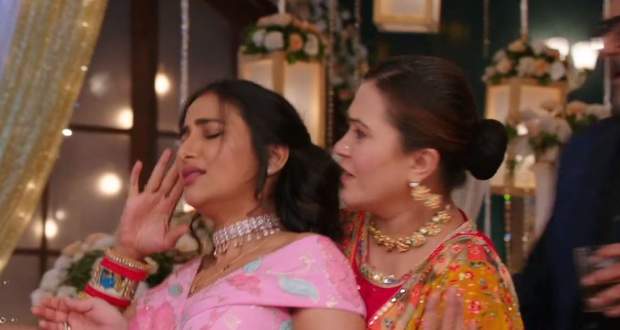 Today's Bade Ache Lagte Hain 2 21st February 2022 episode starts with the doctor informing that Shivina has got an allergic reaction to Kiwi.

As Shivina and Ram request Akshay to stay for the night, he agrees.

After Akshay goes to inform his family, Shivina gets up and thanks Nandini for such a wonderful idea to make Akshay stay at the Kapoor mansion.

Meanwhile, compelled by Meera's vow, Priya fills in Meera about the accident being planned by Mahindra for Ram.

Hearing such a devastating truth about the person she chose as her husband, Meera breaks down and curses herself for letting such a person stay in her daughters' lives.

In the meantime, Ram feels terrible when he overhears Sara saying that their father used the Kachoris to distract them from questioning him about his Jaipur visits because he used to go there to meet his other wife, Rakhi.

On the other hand, Priya's imagination breaks when the glass of water slips from her hand.

As Priya didn't want her imagination to come true, she avoids telling Meera the truth.

At the same time, Ram walks in when Meera says that she'll take a leave.

In the meantime, Shashi tips the police about Neeraj's bank fraud.

When Neeraj calls Shashi to ask for help, Shashi tells Mahindra that Neeraj will do anything to get out of the fraud case.

At night, when Ram and Priya go to sleep, their minds are filled with thoughts to be shared but they stay quiet wondering what the other person will think.

Though their minds are fighting with their own problems, their heartbeats are in sync as they lay on the bed holding each other's hands.