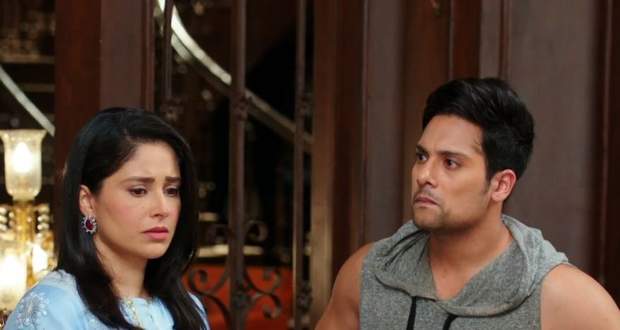 Today's Bade Ache Lagte Hain 2 22nd April 2022 episode starts with Priya challenging Ram to buy a bag for her within a range of four thousand rupees.

Later, Shivina says that this is normal between them and Ram will pick up her call even if she calls right at this moment.

Priya overhears their conversation and says that Ram won't answer her call.

Further, Priya says that she has Ram's mobile so he won't answer.

When Priya mentions Ram going shopping, Shivina misunderstands that he has gone to buy gifts for her.

However, Priya tells her that Ram has realized now that you are his step-sister as she reminded him the previous day.

So, Ram has changed his priority and has gone shopping for Priya.

In the meanwhile, Mahinder informs Shashi that he had sent Neeraj to Kapoor's mansion to mess things which have resulted at the end of pursuing the case.

On the other hand, Priya meets Krish and continues to pursue the case.

Krish informs Priya that the papers in which Vedika and Ram's fathers, Mr. Kumar and Virendra handed over all the shares to Sahil Babbar were fake.

While they both giggle after Krish cracks a joke, Ram makes a video call to Priya and catches her laughing.

When Priya says that Krish made her laugh, Ram starts with his cute jealous comments.

Further, Priya allows Ram to get her a fancy bag.

Later, when Shivina sees the fancy bag she thinks it is for her.

Priya breaks her illusion by saying that Ram did not buy anything for Shivina and the bag is bought for Priya.

As Shivina does not understand how wrong she is by mentioning being a step-sister just to get things done, Priya thinks to teach her a lesson.