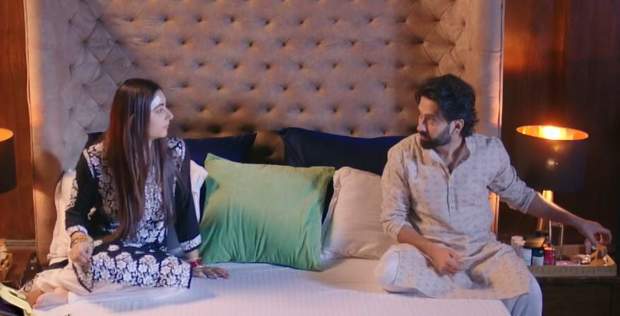 Today's Bade Ache Lagte Hain 2 22nd February 2022 episode starts with Priya waking up in the morning with her mind still trying to figure out how should she deal with Mahindra.

Later, Priya recalls that Mahindra was talking to someone before leaving the Lohri party.

Seeing Ram not present at home, Priya worries thinking that Mahindra and his partner may try to hurt Ram again.

On the other hand, Ram returns after shopping with Vedika.

Priya calms down seeing Ram back.

When Ram tells Akshay that he has brought a variety of clothes for him as he didn't know his choice, Akshay kindly refuses to accept all the clothes as a gift.

Later, Ram goes to have breakfast and hints Priya to come with him to the room.

Though Priya does not understand Ram's wish, she goes with him as she is also hungry.

Using the opportunity, Vedika brags about Ram buying an expensive gift for her.

As Akshay is noticing them, Mamiji mentions that Ram didn't buy anything for Priya.

In the room, Ram tells Priya that he didn't get her anything as she does not like expensive gifts.

Further, Ram purposely breaks his button and asks Priya's help to fix it.

While Priya sews the button back on the shirt, Ram adores her and tucks Priya's hair behind her ear.

Later at the dining table, Priya convinces Akshay to stay for another day as they have a ritual to be performed by Shivina and Priya.

When Akshay agrees to stay at the Kapoor mansion, Shivina records him so that he does not change his decision again.

This gives an idea to Priya to record Mahindra's confession.