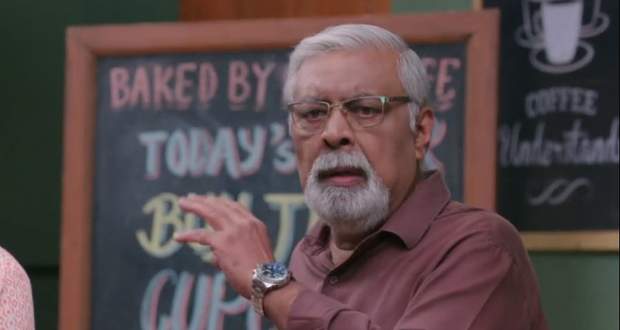 Though Mahindra does not mention anything about Shashi, he confesses that he wanted to kill Ram by pushing his car off the cliff.

In the meantime, Ram tells Adi that he is going to gift his late mom's last memory, bangles to Priya.

Adi says that he has made the perfect decision.

At the bakery, unaware of Sara recording his conversation, Mahindra says that he should have planned Priya's accident instead of Ram.

Having no shame left in his heart, Mahindra says that he is sad because Priya didn't die in the accident.

Mahindra's heart skips a beat when he sees Sara recording his statement.

Seeing this, Mahindra raises his hand to slap Sara.

However, Priya stops Mahindra and says that now she has proof against him and he'll be punished for his crime.

Mahindra walks out of the bakery.

At the Kapoor mansion, Vedika continues to show that she and Ram are very close to each other in front of Akshay.

Meanwhile, Priya arrives at the police station to file a complaint against Mahindra.

Sara reminds Priya that this will affect her and Ram's relationship which she surely does not wish for.

With a strong heart, Priya says that she will accept the fate but won't put Ram's life in danger.

At the same time, the police arrive there with Neeraj.

Suddenly, Priya gets a call from Mahindra.

Mahindra says that she has to choose whether she wants to send him to jail or save Maitri's husband, Neeraj.