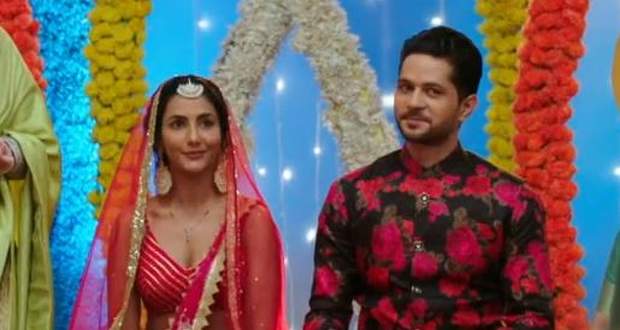 Later, Maitri warns Priya that her plan may get her into trouble.

However, Priya is adamant to teach Shivina and Shubham a lesson and for that, she is willing to take Ram's scoldings too.

When everyone gives their blessings to Shivina and Akshay, Shivina notices that Priya is staying away from them.

Shubham walks to Shivina and brings her to the dancing floor.

Everyone groove to the music and enjoy it without considering Ram for a second.

Watching his family happy, Ram feels good but his heart aches as he is not included.

Seeing Ram wipe off the tear from the tip of his eye, Priya walks to him and holds his hand to show that he isn't alone.

The look Ram and Priya share depict the strong bond they have got themselves into.

As the ritual needs to be started, Nandini invites Priya on the stage.

To everyone's surprise, Priya refuses to carry out the ritual.

When Ram asks her the reason for the same, Priya mentions herself to be Ram's wife who is Shivina's step-brother.

Everyone gets startled to see Priya refusing to do the ritual considering her to be a step-sister-in-law.

Shivina tells Priya that they did not mean what they said.

So, Priya tells Shivina that calling Ram a step-brother is not a compliment and it hurts him.

Realizing her mistake, Shivina apologizes to Ram and hugs him.

Even Shubham says sorry for hurting Ram and promises not to repeat the mistake ever again.