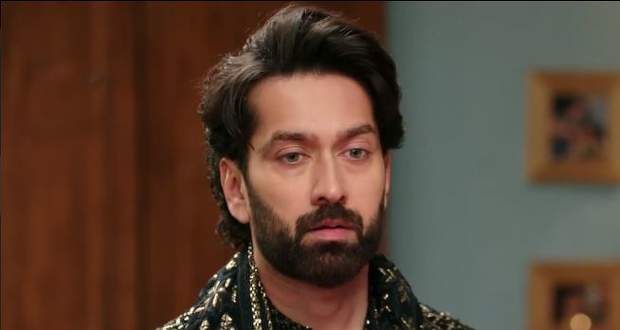 Today's Bade Ache Lagte Hain 2 25th March 2022 episode starts with Vedika sitting in her house alone in the trauma of her failure.

At the same time, she receives an old letter from the bank.

Seeing the name of Neeraj's bank, Vedika decides to use him to make Priya know Ram's past with Vedika.

So, Vedika purposely calls Neeraj late at night and makes sure Maitri hears her telling that she is Ram's ex-girlfriend.

Maitri gets shocked to hear Vedika saying that Ram still loves Vedika and he would have left Priya if Shivina was not married to Priya's brother, Akshay.

Later, Neeraj tells Maitri that she should go and talk to Ram directly without discussing with anyone else.

The next day, with Akshay's help, Ram fools Priya to take her out of the room so that he can remove all her clothes from the room and keep the only option of the saree they painted together.

Meanwhile, Maitri and Neeraj arrive at the Kapoor mansion.

Thinking that Ram is in the bathroom, Maitri starts speaking and mentions him cheating on Priya to return to his ex-girlfriend Vedika.

Priya comes out of the bathroom in shock after hearing Maitri's words.

Maitri tells Priya what she heard from Vedika which devastates Priya's heart.

Recalling all the moments when Ram showed his care for Vedika and Vedika showed her possessiveness towards Ram, Priya sits on the bed disheartened.

Sara and Brinda hear Priya telling Maitri that she will sort things with Ram on her own.