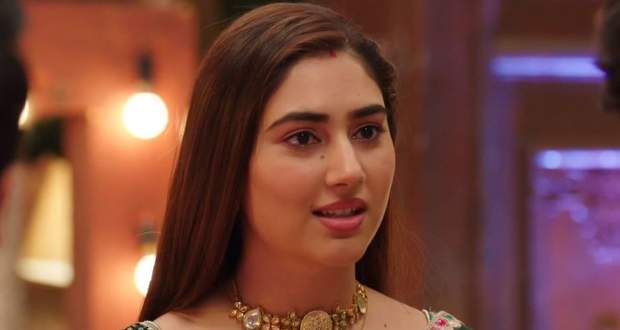 Today's Bade Ache Lagte Hain 2 26th April 2022 episode starts with Krish telling Priya that they might need to go to Alibagh to find out what did Virendra find which cost him his life in return.

However, Sandy and Maitri convince Ram that his chemistry with Priya is a hundred times better than Krish and hers.

On the other hand, Mahinder arrives to meet Sara's husband, Varun, and their son, Ishaan.

To his shock, Varun also informs him about accepting Ram's job offer.

Meanwhile, Priya spots Nandini in her room who has come to talk to her.

However, Priya explains that she overstepped to teach a lesson to Shivina and Shubham.

To Priya and Ram's surprise, Nandini tells Priya that she is proud to have a daughter-in-law like Priya.

Further, Nandini says that Priya did not discuss with her about this which made her feel like an outsider.

On the other hand, Mahinder purposely makes Ishaan overhear him while he states that Sara intends to separate him from his father, Varun.

Hearing this, Ishaan jumps off the window to escape.

In the meantime, Ram admires the bond building between Nandini and Priya.

Further, Ram attends the call and informs him about Ishaan's escape.

When Ram and Priya reach there, they assure Sara that they'll find Ishaan.

Ram notices Ishaan's books and concludes that he is a bookworm and not much active.

So, Ram suggests they search in nearby areas.

However, Mahinder convinces everyone that Ishaan eloped because he didn't want to come to Mumbai.

© Copyright tellybest.com, 2020, 2021. All Rights Reserved. Unauthorized use and/or duplication of any material from tellybest.com without written permission is strictly prohibited.
Cached Saved on: Sunday 2nd of October 2022 02:36:51 PMCached Disp on: Wednesday 5th of October 2022 05:24:48 PM