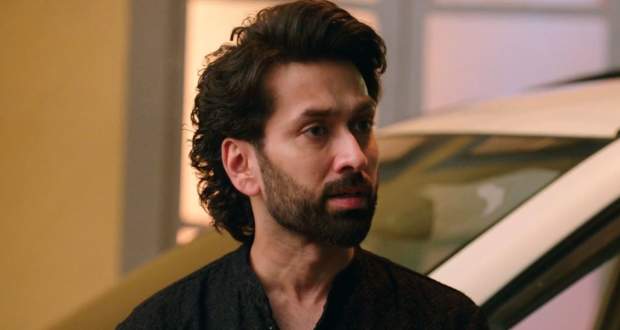 After Mahinder leaves, Priya tells Sara that life goes on smoothly like hers if they work things out.

On the other hand, Varun goes to fight with Mahinder who had manipulated Ishaan to run away from home.

Mahinder reveals that Ishaan is not Varun's child instead he is Sara and her ex-boyfriend's son.

Varun says that he does not care about all these. At present, Ishaan is his own kid.

Meanwhile, Ishaan arrives at the bakery and spots everyone tensed.

However, Ram distracts him with an interesting chemical experiment.

While returning to the Kapoor mansion, Ram recalls that Priya invited the whole family to the Alibagh trip which he planned for the two of them.

Though Priya tries her best to explain what exactly happened, Ram continuously bombards taunts for ruining their private trip.

Later, in the parking area, Priya tries to leave the car when Ram calls her immature.

Ram holds her hand to stop her but suddenly hears a knock on the car's window.

With not much interest, Ram invites Krish inside.

While having dinner, Krish tells everyone that Priya used to be completely lost in books.

Hearing this, Priya also reveals that Krish used to impress girls in the library to get them to do his assignment.

Ram feels left out and tries to say that he was also a bookworm during his college days.

Further, when Krish asks Ram the reason for calling him home, Shubham says that he wanted to help in the case for which he invited Krish over.