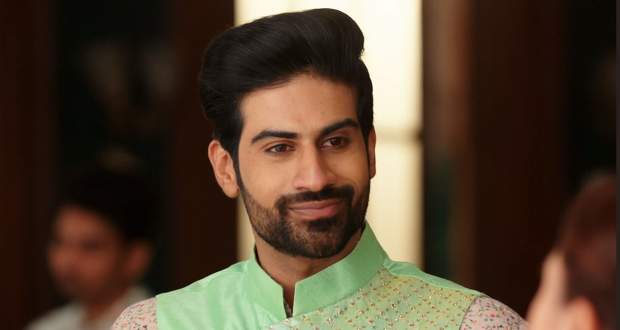 When Ram does not reply to her, Priya tags Ram as boring and walks away.

Further, Priya takes everyone to play Antakshari (a game of singing songs).

Nandini orders the Kapoors to be in Priya's team while Meera and the Soods join Ram's team.

At the start of the game, Priya dances and sings on the stage while Ram finds himself stuck between drunk people.

When Ram's chance arrives, he sings a song for Priya expressing his feelings.

As Ram and Priya move closer, others separate them as they are in different teams.

When Ram gets an opportunity, he sings Priya's favorite song which makes her feel delighted.

Ram and Priya apply colours on each other's cheeks while their hearts beat in sync.

Suddenly, Ram hugs Priya tightly with the fear of losing her.

Priya hugs him back with all the love in her heart.

Seeing Priya not acting according to the expectation, Neeraj jumps in and tells Priya that all these sweet and romantic talks are a lie.

In the drunk state, Priya tells Neeraj that he can leave the party if he has any problems.

Neeraj reminds Priya that she should also leave the Holi celebration because the same day she found out about Ram cheating upon her with his ex-girlfriend.