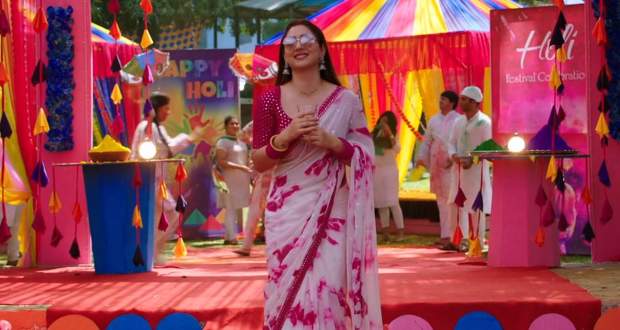 Ram loses his temper when Neeraj goes to say Vedika’s name in front of all the people.

Consequently, Ram punches Neeraj and throws him into the pool.

Ram gets frazzled when Priya disappears from the party. He feels guilty for not realizing what Priya wanted to convey through her song.

Brinda asks Ram to stay calm and think about a place where Priya can go at this time.

Thereafter, Ram goes to the bakery along with Adi and Vikrant.

Ram laments for not telling the truth to Priya beforehand and fears that Priya will leave him now.

Meanwhile, inside the bakery, Priya eats the brownies feeling despondent, sitting on the floor hiding behind the counter.

Priya makes Ram promise her that he will not force her to share her feelings with him.

Agreeing, Ram helps Priya stand up from her place and makes her sit on the chair.

Further on, Priya competes against Ram in the brownie eating competition when deliberately provoked by Ram.

Ram asks Priya to give an award-winning speech after she wins the competition.

Priya dedicates her award to Ram and pours her heart out to Ram.

The words pierce Ram’s heart when Priya accuses him of infidelity.

With broken trust and a crumpled heart, Priya's tears flow through her cheeks taking down the colors applied by Ram.

Priya asks Ram to tell her the name of the person he loves but Ram denies her as Priya is intoxicated and won’t remember anything.

At last, Priya hugs Ram telling him that she wants to forget all of this while Ram wraps his arms around her.