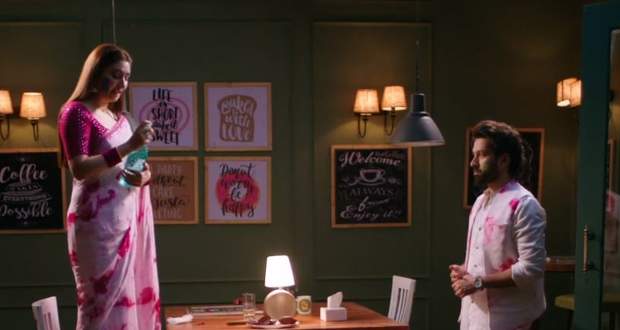 Today's Bade Ache Lagte Hain 2 31st March 2022 episode starts with Vedika receiving a message from Akshay saying that Ram and Priya cannot be separated by her.

Vedika recalls recording Akshay while he says that Priya is important to him more than anyone.

Cruel Vedika sends the video to Ram with an emotional message to manipulate him.

On the other hand, Priya wakes up with a hangover.

At the same time, a servant gives a packet to Priya and informs her that Ram has ordered something.

Priya opens it and panics seeing a box of protection in it.

When Ram enters the room, he tells Priya that he had discussed it with her friend, and Sara before ordering the thing she has received.

With eyes opened wide, Priya handovers the box to Ram and asks him whether he is out of his mind.

Seeing the box, Ram gets terrified and says that he had ordered medicines.

Ram says that he has never thought of such a thing against her wish.

Realizing how stupid she was, Priya starts laughing.

After some time, Priya mentions Vedika being Ram's love.

Ram corrects her by saying that Vedika was his love but it is not the same anymore.

Before leaving the room, Priya says that he can take his time before telling Priya the whole truth.

Crying her eyes out, Shivina asks Ram to get rid of Vedika or else she'll break Ram as well as her marriage.