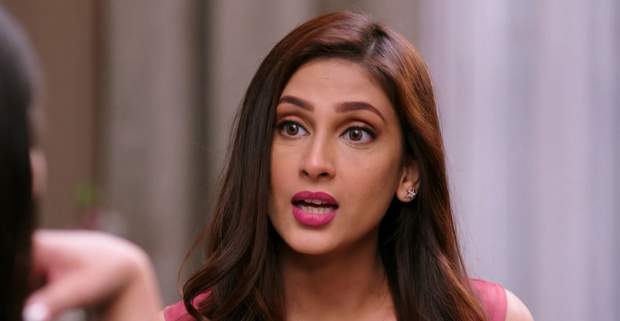 Today's Bade Ache Lagte Hain 2 4th March 2022 episode starts with a quick sneak peek into the events that lead to the cancellation of Ram and Priya’s movie date.

Showing a rewind of 4 hours, the scene opens up with Akshay and Nandini conversing with each other.

Nandini calls Akshay for breakfast to which Akshay shares his heart’s doubt about Priya reacting to him staying like that in Kapoor’s house.

Nandini explains to Akshay that it is normal these days while Akshay feels restless on talking about the bangle.

Meanwhile, Ram mistakenly throws an eraser on Priya as she enters his office, thinking it is Aditya who has come back to nag him.

Seeing Priya squeal in pain, Ram instantly rushes to her and checks on her, getting nervous about any injuries.

After making sure Priya is all right, both talk about their plan of watching the movie together and Priya asks Ram’s laptop to book the tickets.

However, as Priya was about to reach out for the laptop, Ram jumps in and shuts it off, being nervous about her seeing the content open in the laptop.

At the same time, Nandini offers Akshay to fund his private gym which he politely refuses for the meantime.

As Vedika records the conversation on her phone, Akshay savagely asks her why she is still in that house but the phone later gets soaked in water.

Later, Ram tells Priya that they will be going on a date for the first time which makes Priya gasp in surprise noticing Ram’s romantic side.

However, the happiness gets cut off with Nandini calling Ram and informing him that Shashi has sent divorce papers to Vedika.

Ram assures her to return home and tells Priya if they can cancel their movie date while clenching his heart in disappointment.

On returning, Ram advises Vedika to talk with Shashi if she still loves him.