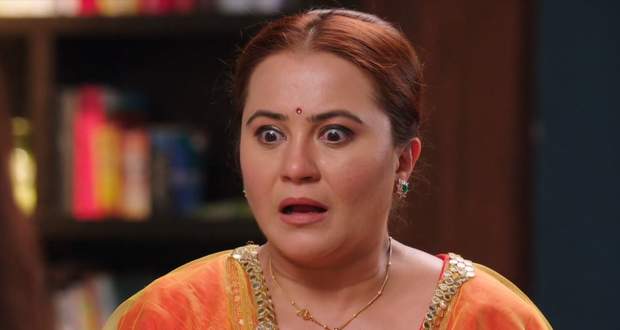 Today's Bade Ache Lagte Hain 2 6th April 2022 episode starts with Mahinder freely talking about how he was hired by Shashi to make an accident and kill Ram.

While Vedika mentions that Ram could have died in the accident, Mahinder realizes that he has messed up things by confessing his crime.

Mamiji's eyes stay wide open after listening to Mahinder and Vedika talk on a phone call and knowing that Priya knows the truth.

After explaining Shubham's absence due to tours, Ram convinces Priya to sign instead of Shubham.

Later, Priya decides to confess to Ram that her father, Mahinder was the one who tried to kill him.

However, Adi interrupts them and Priya readily excuses them.

When Priya comes down the stairs, she sees that Mamiji has called Meera and Sara for some work.

Priya gets startled when Mamiji reveals that she wants to talk about the accident.

Everyone gets shocked to know that Priya knows that the accident was planned for Ram and also who had planned it.

In the meantime, Ram tells Adi to work hard on the case of winning the land gifted by his father to her mother.

Meanwhile, Priya confesses that her father had tried to kill Ram.

Fuming with anger, Nandini asks Priya the reason for hiding the truth.