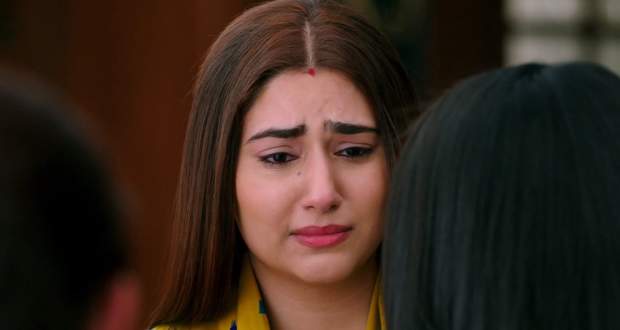 Ram comes downstairs and says that Priya kept quiet because Ram had asked her to.

Further, Ram answers Mamiji's questions and says that has anyone thought about what Priya is going through after knowing that her father tried to kill her husband.

Unable to handle Mamiji's drama, Ram tells her that she does not have any right to insult his family, and Priya's family is his family.

Nandini questions Ram about how can she be assured that Mahinder will not try to harm Ram again.

Hearing this, Priya stands ahead of Ram and promises that she'll be Ram's shadow and protect him from any danger coming his way.

Later, Vedika awaits good news from Mamiji while Kunal tells her that she is just wasting her time.

Vedika's illusion of victory breaks when Nandini comes there and tells Vedika that she needs to believe that Ram belongs to Priya.

Finally, Nandini gets Vedika taken forcefully to the rehabilitation center.

Before leaving, Vedika threatens to make a comeback.

In the meantime, Meera cries her eyes out accepting that her ex-husband has proved to be a curse in Priya's life.

Ram explains to Meera that Priya had put her life at stake to save him that's why he doesn't care about anything else.

Further, Ram lights the moment with his lame jokes and calms down Meera.

On the other hand, Priya walks on the streets with tears rolling down her cheeks and feels guilty for hiding the truth from Ram.