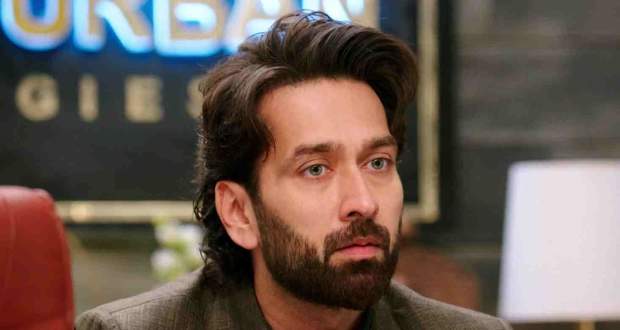 Today's Bade Ache Lagte Hain 2 8th March 2022 episode starts with Akshay wondering whether he should talk to someone about Vedika having the second bangle that belonged to Ram's mother.

In the meantime, Ram cracks a very lame joke yet it makes Priya laugh.

Further, on Ram's insistence, they decide to stay on the terrace and fall asleep while watching the stars.

The next morning, Priya wakes up and finds her hand in Ram's hand.

When she tries to free her hand, Ram holds her hand tighter.

Seeing Ram disturbed by the sunlight, Priya keeps her hand in between to block the light.

So, Priya acts as if she is still asleep to avoid the awkwardness that will be created when they see their hands interlocked.

When Ram finds himself holding Priya's hand, he leaves her hand runs away thinking that she'll get angry.

Later, Brinda and Adi arrive at the Kapoor mansion where Ram calls everyone to make an announcement.

Ram tells that he and Priya have taken a decision that Vedika needs help and they have found a perfect place in Manali.

When Nandini says that Vedika has many people to support her, Ram says that he does not think the same and Vedika needs to work on her mental health.

Vedika gets irritated and turns towards Nandini for support.

However, Nandini says that she agrees with Ram and Priya.

Ram thanks Priya for her support.

Later, Brinda tells this scene to Sara and they celebrate their win against Vedika.

Further, Sara and Brinda tells Ram that media wants to cover his and Priya's story during the Mahashivratri for which he has to convince Priya.