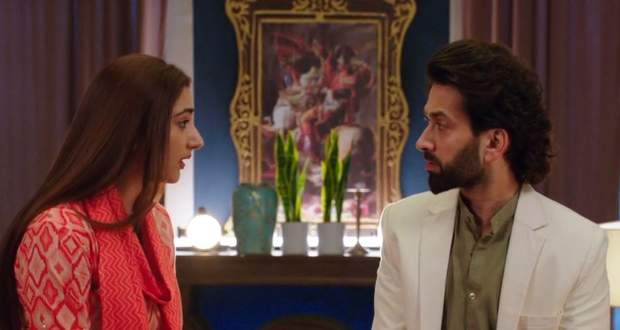 Today's Bade Ache Lagte Hain 2 9th May 2022 episode starts with Krish confirming with Adi whether Shubham is trustworthy enough to let Priya go with him.

On the other hand, while getting Priya ready for the meeting with the microphone and mic, Ram caresses her face with immense love.

Furter, Ram holds Priya's hand and tells her that if she ever thinks of putting her life in danger then before her someone else will face death.

Hearing the three magical words 'I Love You' from Ram for the first time, Priya hugs him and absorbs the moment to cherish forever.

Seeing Ram being restless, Priya keeps her hand on Ram's cheeks and assures him that everyone will be fine.

When Ram says that this is Priya's style of saying I Love You, she runs away with a blushing face.

However, Ram holds Priya's hand and grabs her closer through the waist.

With the intention to kiss Priya, Ram moves forward but suddenly they get interrupted by Shubham.

When Shubham asks whether Priya is ready, Ram pats Shubham's head and says that he could have asked it from outside too.

At the same time, the light in Ram's room goes off.

Meanwhile, Varun regrets his mistake because he wanted to remove the fuse of the presidential suite because the papers are hidden somewhere in the same room.

Varun also overhears the staff saying that Ram and Priya have to be shifted to the presidential suite which makes him restless.

Later, Krish warns Ram and Priya to be careful because Shashi or his puppet is roaming in the resort.

Meanwhile, Sara learns that Varun is lying about going to the beach because there is no trace of sand on his shoes.