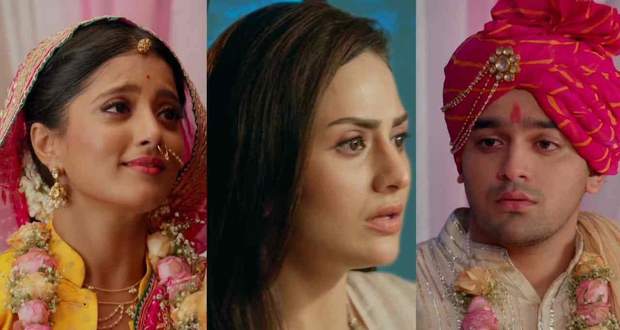 Devraj assures Vishnu that he is taking a daughter home.

Meanwhile, Devraj sees Mami Mami looking at the events sneakily from behind the car.

At the same time, Manini goes into the stranger’s room and starts to cry calling the stranger Prateek and telling him that his sister aka Manini wasn’t able to complete the promise she made to him.

Manini starts to recall how Manini’s father and Devraj used to be business partners but Devraj accused her father of fraud.

Manini’s father changed after this incident and started to fight with her mother and became an alcoholic.

One day, her father put the house on fire while Manini saved Prateek with great difficulty.

Manini holds Prateek steadily and tells him she will take revenge on Devraj.

Meanwhile, Manini recalls how she got to know Hemant was Devraj's son and acted to fall in love with him and married him and took the responsibility of Yuvan from Devraj.

Prateek lost his temper and started to run into the room while panicking.

Manini starts to scream for help while the doctors inject him with medicine while Prateek goes unconscious.

Manini promises to asleep Prateek that she will claim Devraj’s possession as her and will keep Yuvan in Prateek’s room while Yuvan will write his story on the walls instead of Prateek’s.

Manini declares she will become the nightmare of the Rathore family.

Later on, The Rathore family reaches the Rathore house while the house is pitch dark.

Suddenly the house lights up while Yuvan holds Banni’s hand and walks on the bed of roses on the floor.

Meanwhile, Manini enters dolled up and starts to do the Ghoomar while everyone sees Manini’s action flabbergasted.

Manini takes the aarti thali and asks everyone to gather at the entrance to welcome Banni.

Banni confronts Manini for her suspicious actions while Manini says she’s doing this for Yuvan as Banni is Yuvan’s obsession.

Banni compares Manini to a jalebi while trying to guess her next scheme.

Banni asks Manini with sarcasm if she has kept a snake in kalash or mixed something in the sindoor water to make her feet burn.

© Copyright tellybest.com, 2020, 2021. All Rights Reserved. Unauthorized use and/or duplication of any material from tellybest.com without written permission is strictly prohibited.
Cached Saved on: Sunday 2nd of October 2022 06:09:11 AMCached Disp on: Thursday 6th of October 2022 04:39:41 PM