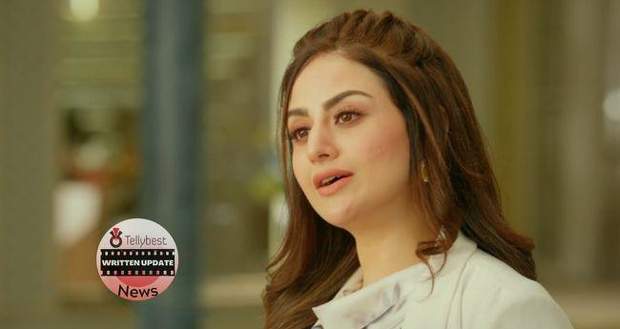 Today's Banni Chow Home Delivery 14th September 2022 episode starts with Banni pacifying Yuvan saying that she will not force him to do any audition.

However, Banni convinces him to sing for his Banni Dulhan and blindfolds him.

Unknown to Yuvan, Bani takes him outside and tells him to sing for her while they are surrounded by people which Banni has gathered.

Yuvan starts singing beautifully for Banni while dancing around him.

As soon as he completes the song, Banni removes his blindfold and he gets shocked and panicked to see people clapping for him.

Banni praises Yuvan while he goes to his room blaming Banni for cheating and making him sing for the public.

However, Banni calms him and tells him that she was just trying to make him realize that it was not one-day magic but that he really has a singing talent.

Yuvan looks at Banni with gleaming eyes as if she's a goddess while she tells him that his singing can feed a lot of people's hungry minds.

Banni tells Yuvan to recall the story Debraj told him and states that he should only focus on his goal.

Yuvan goes to the window and sees the guests praising him to Debraj and gets giddy.

Later, Debraj enters the room while Yuvan finally agrees to the audition and goes to get changed.

Yuvan comes out looking handsome and Banni makes him sign the audition form while he asks about the place.

However, Banni tells him that she will be able to go for the first time and comforts him by saying that they are together.

Meanwhile, at the auditorium, Shruti worries as she states that judge Agastya Kapoor has still not arrived and only thirty minutes are left.

Agastya's assistant picks up Shruti's call and tells her that they are on the way and will reach there shortly.

On the other hand, Banni is speeding her scooty towards the auditorium while Yuvan holds her waist and tells her that he is very nervous.

She also tells him that she's nervous about his audition which makes his nerves settle down.

Agastya gets stuck in traffic and an elderly couple selling purple balloons begs him to buy some but the assistant says that they do not need them and offer money.

Further, Agastya gets out of the car and starts telling his fans to buy the purple balloons to show him how much they love him.

© Copyright tellybest.com, 2020, 2021. All Rights Reserved. Unauthorized use and/or duplication of any material from tellybest.com without written permission is strictly prohibited.
Cached Saved on: Saturday 1st of October 2022 01:26:16 AM