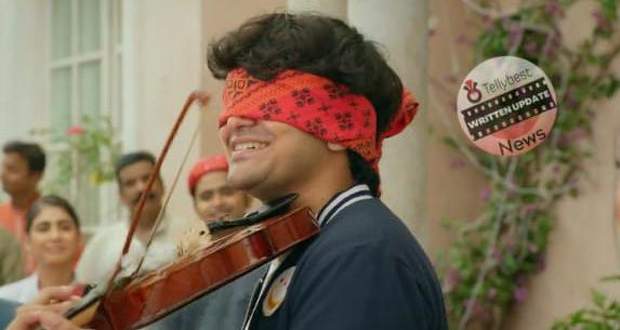 Today's Banni Chow Home Delivery 15th September 2022 episode starts with Banni getting stuck in the traffic made due to Agastya's spontaneous concert and feeling irritated.

Yuvan tells Banni that he is worried that they won't reach the audition on time and they both go towards the front.

The security guards try to stop Banni but she beats them all and reaches in front of Agastya by climbing the truck.

Further, Banni saves Agastya from falling and starts berating him by telling him that many people are getting late because of his impromptu concert.

She insults him calling him a rich snob and leaves from there ordering him to clear the traffic as she's getting late.

Agastya calms his fans by telling them that it was a prank shoot and leaves from there while ordering his secretary that he doesn't want to see this girl's face ever again.

Meanwhile, Viraj calls Charmi and requests her to send the address of the amusement park as he forgot the invitation card at home.

However, Charmi gets angry hearing Manini insulting Viraj and intentionally sends the address of a cemetery inauguration.

Later, Banni and Yuvan reach the auditorium on time and are registering while Agastya also comes there at the same time.

Banni asks a person about him and she reveals that Agastya is the judge of the competition.

Banni feels guilty for arguing with Agastya previously and hopes that her actions do not lead to problems for the dream that she has dreamt for Yuvan.

Further, the auditions start and Agastya harshly criticizes the contestants and accepts only the best contestants.

Banni tells Yuvan that he will have to go on the stage alone and she will cheer him from the side and will pray for his win.

However, Yuvan gets anxious and worried after seeing many contestants coming out of the stage crying.

Banni convinces him to stay and give the audition while the nearby contestants start laughing at him saying that he is a kid and will get mocked by Agastya.

© Copyright tellybest.com, 2020, 2021. All Rights Reserved. Unauthorized use and/or duplication of any material from tellybest.com without written permission is strictly prohibited.
Cached Saved on: Friday 30th of September 2022 04:54:44 PMCached Disp on: Saturday 1st of October 2022 12:55:12 AM