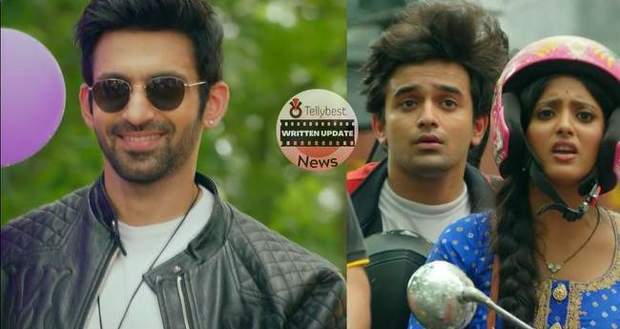 Further, Debraj tells Banni that he is grateful to her for making him believe that Yuvan can complete his dreams.

Meanwhile, Manini and Viraj reach the cemetery's inauguration place and get confused at seeing the small area where the supposed amusement park is going to be built.

Manini asks if they are at the right place and Viraj proudly says that Charmi couldn't make a mistake.

However, they soon learn that the minister is not attending and that Manini will have to give a speech making her furious.

Back at the auditions, Priya tells Agastya that the next contestant, Upasana is a rich producer's daughter and mocks her saying that she is using nepotism.

However, Agastya passes her to the next level and scolds Priya saying that not every child wants to use their father's name to get ahead in life.

The last audition is of Yuvan and he hesitantly entered the audition room while Agastya is still in a sour mood due to the previous argument with Priya.

Yuvan stumbles into the audition room and Agastya starts asking him random questions.

Further, when Yuvan's educational background is brought up, the other crew members start laughing at him for not knowing the meaning of the word 'financial'.

Agastya asks Yuvan why he didn't study further if he didn't have any financial problems which makes Yuvan nervous.

Yuvan keeps getting answers while twitching which leads to Priya and Agastya's assistant mocking him.

Agastya feels agitated and tells Priya to write on the forms next time that only stable contestants are allowed to participate.

Further, Agastya tells Yuvan to go as he does not possess any style or x-factor which can make him pass through the next level.

Feeling annoyed, Agastya gives him a chance but Yuvan gets nervous due to the questions and fails to sing.

Agastya announces pickup but Banni comes out just then and starts verbally fighting with Agastya to give Yuvan a chance to sing.

Agastya asks Banni if she thinks her husband Yuvan become a rockstar like him which silences her.

© Copyright tellybest.com, 2020, 2021. All Rights Reserved. Unauthorized use and/or duplication of any material from tellybest.com without written permission is strictly prohibited.
Cached Saved on: Friday 30th of September 2022 10:15:42 PMCached Disp on: Saturday 1st of October 2022 12:33:14 AM