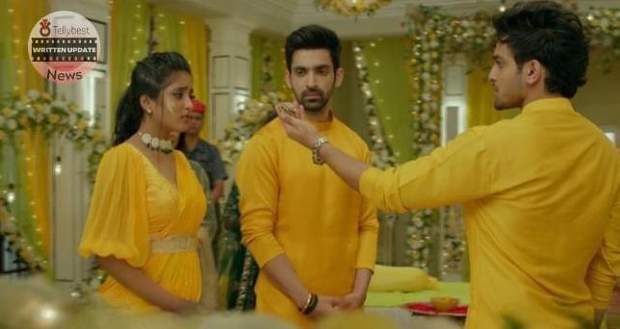 Today's Banni Chow Home Delivery 17th November 2022 episode starts with Banni telling Devraj that her and Yuvan’s relationship is connected through the heart so neither God nor Devraj can separate them.

Later while Banni is praying to lord Shiva, Hemant arrives there and announces that Veer must be the one who sent the mental institute people to take away Yuvan.

Banni however tells Hemant that they need to find out what happened in Yuvan’s childhood that caused Kabir’s personality to emerge and Hemant nods.

While picking it up, Banni suddenly recalls how Yuvan was very possessive about his Bunty toy and rushes to his room.

On the other hand, Tulika questions Kabir if he is scared Yuvan’s personality will come to the surface but Kabir denies it and Tulika informs him in a soothing voice that she knows Kabir is a very strong person and she is here to support him always.

Looking deep into Tulika’s eyes, Kabir urges her not to leave him alone.

Elsewhere, Tulika pleads with Kabir to tell her about her childhood since they are getting married soon.

In the meantime, Banni questions Devraj if he knows the other person in the photo and Devraj tells her that Bunty was Yuvan’s childhood friend whom Yuvan’s mother adored a lot.

He further adds that after Bunty’s parents died, Yuvan’s mother brought her home to take care of her but on the Mahashivraatri night Bunty got lost due to the crowd.

He even informs Banni that on Mahashivratri night they also lost Yuvan’s mother in the fire.

Meanwhile, Kabir also tells Tulika that he recognized her by the B locket on her neck and how he used to take care of Bunty along with his mother.

Hearing this, Tulika informs Kabir that he has given her a special gift that she will cherish all her life and hugs, Kabir.

In the meantime, Banni announces that Tulika is not only related to Yuvan’s childhood but also his trauma.

Devraj gets bewildered hearing Tulika’s name and Banni clarifies that Tulika is Bunty only and now Tulika will bring Yuvan back.

On the other hand, Tulika informs Kabir that it must be hard for him to cope with his mom’s loss.

Kabir yells that he was not mad but someone gave him medicines to make him mad so he does not tell anyone who killed his mother.

Meanwhile, a servant puts a gazra on the mysterious lady's head while she is staring at the blank television screen.

Tulika even urges Kabir to tell her the name of the killer but Kabir announces that he lives with the killer every day but he can’t take the name.

Hearing this, Tuilika figures out that if she can make Kabir share the truth, it will make Kabir’s personality finish.

Later, Tulika meets her alter ego in a room who orders Tulika to accept she loves Kabir and Tulika gives in.

The ego then urges Tulika to think about herself only and keep Kabir alive so when Banni questions Tulika if she has gotten any truth out of Kabir’s mouth, Tulika replies negatively.

© Copyright tellybest.com, 2022, 2023. All Rights Reserved. Unauthorized use and/or duplication of any material from tellybest.com without written permission is strictly prohibited.
Cached Saved on: Monday 21st of November 2022 09:10:14 AMCached Disp on: Saturday 10th of December 2022 03:17:21 PM