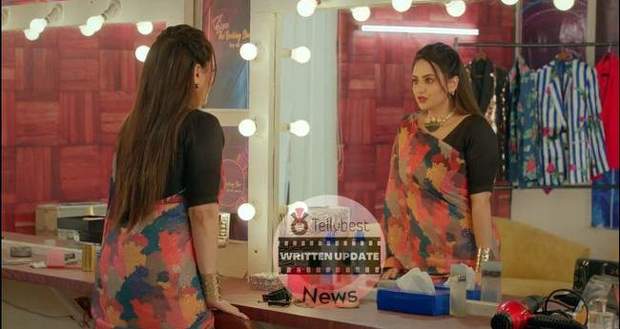 Scared Banni and her family members try to find Yuvan everywhere in the venue but fail to find him anywhere.

Later, Hemant calls Manini to ask if Yuvan is at home but she does not pick up the call.

Banni tells Hemant and Devraj to go home with Charmie while she will try to find him at the venue.

On the cliff, Yuvan gets scared seeing the height and asks Manini if they were supposed to go to the stars.

However, Manini urges him to jump as he will reach the stars from there only but he urges her to join her.

Yuvan holds Manini's hands and tells her that they will jump together.

Scared Manini releases her hand from his hold and screams that she is not his Vandana Mama.

Manini tells him that she is taking her revenge on Devraj by killing him and blames Banni for destroying her plans every time.

She explains that he needs to die to extinguish her thirst for revenge.

However, innocent Yuvan says he would have jumped earlier if his mother wanted him to jump.

Hearing Yuvan’s words, even the cold heart of Manini melts for a second but she tells him to jump and meet his real mother.

Manini pushes him from the cliff and goes back home happily.

In Banni’s room, Banni sees her belongings gathered in one place and Charmie informs her that Yuvan told her that he is going somewhere.

Charmie asks Viraj to tell the truth for the sake of their unborn child.

He recalls Manini giving him a letter and informing her that he will cover only half the distance with them.

Viraj pales finding out that the letter is Yuvan’s suicide note and runs to save him.

At the same time, Charmie finds the letter on the ground and runs to Banni after reading the letter.

Meanwhile, Banni reads the letter that exclaims that Yuvan is going away from her life as she deserves someone better.

He says he is a fool and she deserves a man like Agastya, not a child-like Yuvan and urges her to marry Agastya.

He requests his family to not cry and tells Banni that he is going away and he will watch her and Agastya from the stars.

At the same time, Manini reaches the living room and an angry Banni confronts her about Yuvan’s whereabouts.

She pushes Manini onto the sofa angrily and threatens to kill her if she does not tell her about Yuvan’s whereabouts.

Hemant separates Banni from Manini but she shakes his hold off and pushes him aside.

She puts her leg on the sofa and shows her the suicide note and accuses Manini of doing this.

For the last time, Banni asks Manini where Yuvan is.

© Copyright tellybest.com, 2022, 2023. All Rights Reserved. Unauthorized use and/or duplication of any material from tellybest.com without written permission is strictly prohibited.
Cached Saved on: Monday 21st of November 2022 08:19:09 AMCached Disp on: Monday 5th of December 2022 12:39:27 AM