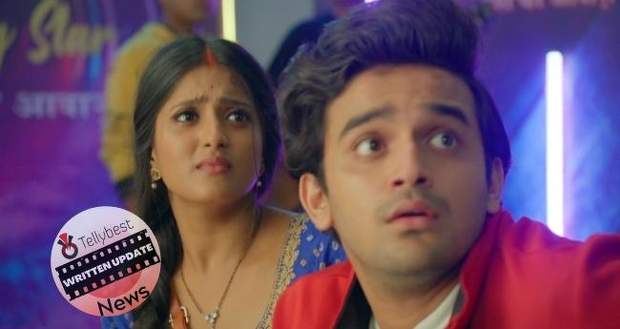 Today's Banni Chow Home Delivery 17th September 2022 episode starts with Banni asking the judge to give Yuvaan a chance and judge him on the basis of his talent and not his appearance.

Agastya mocks Banni’s confidence in Yuvan and asks his team to wrap up.

However, Banni is not ready to give up and shames him for being arrogant and hurts his ego by telling him that a true star never insults the talents of others.

Agastya gets instigated and takes a challenge that he will let Yuvan perform and if his singing is praised by even twenty people then he will leave being the judge of the show.

Banni records Agastya’s challenge and tells him that she will see him at the competition.

On the other hand, Manini arrives at the inaugural ceremony and asks Viraj to find out about Banni who has tricked her into coming there.

Manini assumes the inauguration is of the amusement park but in reality, it is a burial ground.

Manini's overexcited speech about encouraging people to come as often as possible becomes a source of mockery making people laugh.

Viraj tries to stop her but it was already too late and Manini’s foolhardy video becomes viral in no time.

Meanwhile, Banni is angry at Agastaya while Yuvaan tries to calm her and tells her that he will keep his promise.

Seeing Yuvaan scared, Banni motivates Yuvaan saying that he will definitely sing in front of Agastya and will succeed too.

On the other hand, Manini arrives home and calls out Banni Chow and accuses Charmie of being in Banni’s team.

Charmie looks scared to see Manini angry and apologises to her for getting it wrong.

Manini does not look convinced and insults Charmie by calling her worst than a dog.

On being questioned Viraj tells them that Manini made a fool of herself by asking people to enjoy coming to the burial ground.

Devraj asks Manini to not get angry at Charmie but Manini tells him to stay out of it.

Charmie loses patience at being continuously insulted by Manini and tells her that she also treats everyone in the house as puppets.

Manini loses her temper and is about to slap Charmie when Banni stops her and tells her that she cannot bully people in the house.

Manini cannot let her anger show in front of Yuvaan and walks out from there.

Later, Manini uses emotional blackmail to get the truth out of Yuvaan about his outing with Banni.

© Copyright tellybest.com, 2020, 2021. All Rights Reserved. Unauthorized use and/or duplication of any material from tellybest.com without written permission is strictly prohibited.
Cached Saved on: Sunday 2nd of October 2022 12:13:57 AMCached Disp on: Wednesday 5th of October 2022 04:43:39 PM