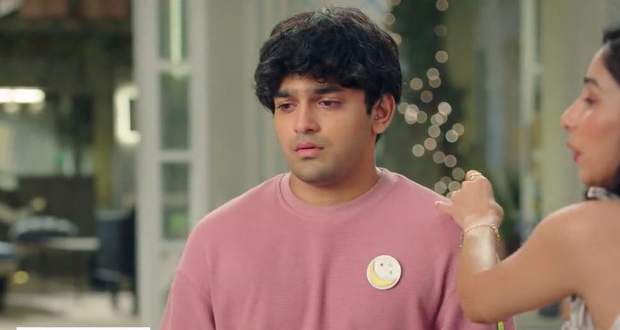 He then goes to Yuvan’s room to check on him.

Seeing Debraj very unwell, Niyati goes to bring some water for him while Yuvan stays there.

At the same time, Debraj once again calls Banni to ask her about the plan but gets unconscious.

Yuvan then takes Debraj’s phone and announces that he will get Viraj’s phone.

However, Banni tries to say otherwise but the call cuts.

While Yuvan is thinking about his next step, Hemant arrives in the room with Niyati to check Debraj’s pulse.

Elsewhere, Banni gets ready quickly to visit Rathod's house to stop Yuvan from doing anything stupid.

Banni’s Mami sarcastically says to Banni that if she continues seeing Yuvan then people will question her character just like her mom.

Hearing this, Banni gets furious and tells that she will take each of the neighbor aunties to the tattoo center to get a tattoo on their forehead which will read that Banni’s mom was not characterless.

Later after Debraj gets his consciousness back, he and Hemant start discussing Yuvan and Manini.

Afterward, Yuvan asks a servant to write an apology letter on the board so his mom can see it.

While Viraj is spinning around with Charmi in his arms, Yuvan tries to take his phone from his pocket but fails.

Yuvan’s touch creates a tingling sensation on Viraj’s body and he drops Charmi to the floor making everyone laugh.

Viraj then takes Charmi to Yuvan’s room so he can put balm on her swollen back and Yuvan follows him.

While Viraj is taking care of Charmi, Yuvan takes the phone slowly without Viraj’s noticing.

At the same time, Banni arrives at the doorway and decides to call Viraj directly.

On the other hand, in the living room, Yuvan is talking to Banni via Viraj’s phone, Manini overhears Banni’s name but dismisses it quickly.

Yuvan then informs Banni about his adventure and promises her that he will come to meet her outside.

Meanwhile, Viraj notices the board and gets furious.

At the same time, Yuvan comes outside to meet Banni but gets frightened after hearing the band.

Banni tries to get into the house but the guards stop her.