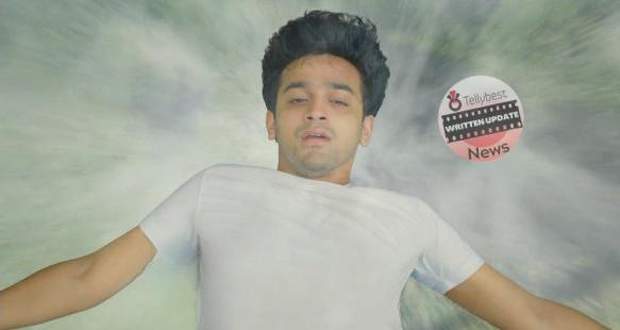 Banni picks up a belt and whips it on Manini’s shoulder while Hemant tries to stop her.

Scared, Manini runs outside and Banni follows her while Devaraj stops Hemant from following them.

Outside the house, Manini grabs the belt and accepts that she took Yuvan with her and made him write the suicide note.

She tells Banni about throwing Yuvan from the cliff and states that Banni has no evidence against her.

Hearing that, Banni sits on her scooter and goes to the cliff in haste.

Reaching the area, Banni falls on her knees and calls for Yuvan while he calls for Banni.

Banni sees Yuvan hanging from a tree root so she saves him by pulling him up the cliff while her back is tied to a tree for support.

Before Yuvan can say anything, Banni gives him a tight slap and asks him about the reason for his foolish actions.

Yuvan gives explanations of Agastya being a better man for her but she shushes him.

She praises his golden and kind heart and confesses her love to him saying love is caring, and worrying for the other person.

Banni holds Yuvan’s hand on her heart and asks him to understand the rhythm of her heartbeat.

Innocent Yuvan puts his head on her chest and hears Yuvan in her heartbeat.

He promises Banni that he will never do something like this and says “I love you Banni Dulhan” while Banni also confesses her love to him.

The police arrest her and she tells Devraj about her father and tells everyone that he killed her family.

Manini reveals that she did not give medicines to Yuvan and threatens everyone that she will come back to take her revenge.

Meanwhile, the police take Manini away and Devraj exclaims who can give medicines to Yuvan other than her.

Later, Banni opens her fast by seeing Yuvan’s face through the sieve and he feeds her Kheer himself.

She tells him that he can get healthy and he gets excited thinking that no one will make fun of him anymore.

Yuvan tells Banni he loves her so much and they will remain together while she recalls the doctor’s warning.

However, she is ready to take the risk of Yuvan losing his memories.